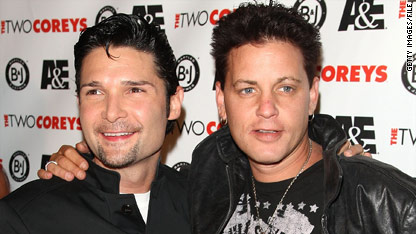 [Updated 2:18 p.m.] Corey Feldman’s publicist Stacy Hess issued a statement from Feldman on the death of his friend Corey Haim:

"I was awakened at 8:30 this morning by my brother and sister knocking on my bedroom door. They informed me of the loss of my brother Corey Haim. My eyes weren't even open all the way when the tears started streaming down my face. I am so sorry for Corey, his mother Judy, his family, my family, all of our fans, and of course my son who I will have to find a way to explain this to when he gets home from school.

"This is a tragic loss of a wonderful, beautiful, tormented soul, who will always be my brother, family, and best friend. We must all take this as a lesson in how we treat the people we share this world with while they are still here to make a difference. Please respect our families as we struggle and grieve through this difficult time. I hope the art Corey has left behind will be remembered as the passion of that for which he truly lived."

Click to watch video
[Updated 9:43 a.m.] We now have a full story on Haim's death, including background on his previous battles with drugs.

Haim's most famous role was in the 1987 movie "The Lost Boys," in which he appeared with his frequent co-star, Corey Feldman.