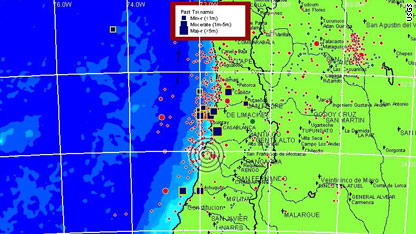 A USGS map shows the area where a 7.2 magnitude earthquake hit in Chile Thursday.

[Updated 2:07 p.m.] Rancagua Mayor Eduardo Soto said that no fatalities were immediately reported and that the biggest worry was damage to homes, CNN Chile reported.

"There is significant damage in Rancagua," the new president said. "We're going to send the necessary armed forces to guarantee citizens' safety."

Are you there? Send your photos, videos and descriptions to CNN iReport

Pinera said Thursday afternoon he will declare the area a catastrophe zone.

The country's national emergency authorities also put in place a tsunami alert for the coastal area near where several earthquakes hit.

"I don't want to alarm anyone, [the alert] is solely precautionary, but we have to take precautions when there are human lives at risk," Pinera said.

[Updated 11:35 a.m.] The USGS has downgraded the magnitude of the temblors that hit Chile today - saying that a 6.9 magnitude hit, followed by 6.7 and 6.0 magnitude quakes.

Two additional aftershocks were reported: a 5.4 magnitude and a 4.9 magnitude, in the same region of Libertador General Bernardo O'Higgins, Chile, near the coast.

[Updated 10:43 a.m.] Three temblors rattled Chile today - a 7.2 magnitude earthquake, followed 16 minutes later by a 6.9 magnitude quake, and then a 6.0 magnitude aftershock 11 minutes after that, the U.S. Geological Survey reported.

They were the strongest aftershocks to rattle Chile since a February 27 earthquake on the country's west coast that toppled buildings and spawned a tsunami, killing several hundred people.

[Updated 10:22 a.m.] Rolando Sanchez, President of CNN Chile, says the 7.2 magnitude earthquake could be felt strongly in the newsroom in Santiago, Chile.

Sanchez said the felt about four aftershocks earlier in the day, but none as intense or lasting as long as the 7.2 magnitude quake. Sanchez said some people were running and others were evacuating.

"We also have information from our crews where the inauguration is taking place that they're evacuating people around the main government building on the outside asking them to move away and move to higher ground, although the inauguration itself is continuing," Sanchez said.

[Updated 10:07 a.m.] The 7.2 magnitude earthquake shook the ground near the region of Libertador General Bernardo O'Higgins, near the Chilean coast. It struck just as Chile prepared to inaugurate a new president, Sebastian Pinera.

The epicenter was about 95 miles (152 km) south-southwest of the capital, Santiago, and about 90 miles (145 km) away from Valparasio, where Pinera was to be inaugurated. Television footage showed the inauguration proceeding without a hitch.

The quake was almost 22 miles deep and centered 95 miles southwest of Santiago, according to USGS.

The Pacific Tsunami Warning Center said in a statement that "a destructive Pacific-wide tsunami is not expected" and there is no tsunami threat to Hawaii.

[Posted at 9:54 a.m.] An earthquake with a preliminary magnitude of 7.2 has struck south of Santiago, Chile, the United States Geological Survey reports.

This story is currently developing. We'll bring you the latest information from Chile as soon as we get it.

Women who have been sexually assaulted have a higher risk of developing a type of brain damage that has been linked‚Ätwitter.com/i/web/status/1‚Ä¶Xd
cnni