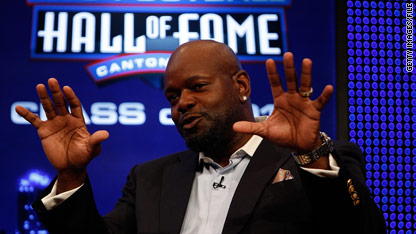 Hall of Famer Emmitt Smith will appear on "Who Do You Think You Are?"

The embarrassment of college basketball riches continues Friday into the weekend. But there are plenty of alternatives - from baseball to tennis to hockey - if you’re already hooped out (all times Eastern).

– Dodgers vs. Reds (3:05 p.m., MLB.TV): Cuban defector Aroldis Chapman, who hit 100 mph on the radar gun in his spring training debut for the Reds, makes his second appearance today against Los Angeles.

– Lafayette vs. Lehigh (4:45 p.m., ESPN2): One of the nation’s oldest collegiate rivalries takes center stage as the Leopards and Mountain Hawks clash for the Patriot League title - and an automatic bid to the NCAA tournament.

– Who Do You Think You Are? (8 p.m., NBC): Hall of Fame running back Emmitt Smith features in this week’s episode of the genealogy documentary series.

– Lakers vs. Suns (9 p.m., KCAL-TV/KUTP 45): The possible second-round playoff foes meet at the US Airways Center, as scorching Phoenix seeks its 15th victory in 19 games.

- Hit For Haiti (10:30 p.m., Tennis Channel): Roger Federer’s impromptu Haiti benefit at the Australian Open was such a success that a group of current and former tennis pros are doing it again. Federer, Pete Sampras, Martina Navratilova and Steffi Graf are among the luminaries slated to participate.

3 – Consecutive World Cup titles by Lindsey Vonn after Friday’s victory in the super-G at Garmisch-Partenkirchen, Germany.

33 – Number of career World Cup wins for Vonn, the most for an American skier.

50 – Age of former NFL receiver Willie Gault, who is considering a comeback.