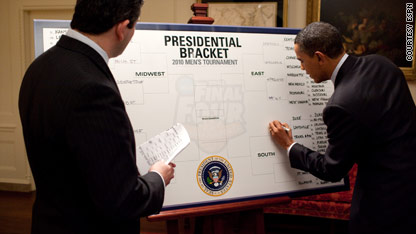 Barack Obama fills out his bracket for the NCAA tournament.

President Obama, a basketball enthusiast, filled out his NCAA tournament bracket with ESPN - and he sees Kansas, Kansas State, Kentucky and Villanova rounding out the men's final four.

Obama, who last year correctly picked North Carolina, had his bracket ranked 903,125 overall, just above the 80th percentile in the ESPN Tournament Challenge, according to the network's Web site.

For the first time, Obama also filled out the women's bracket. His choices? Connecticut, Notre Dame, Stanford and Tennessee for the women's final four.

“After spending a few minutes with President Obama at the White House it was evident he has clearly paid attention to college basketball this season," ESPN.com senior writer Andy Katz said in a statement. "While I know he didn’t have time to watch ESPNU when I talked to all 65 tournament coaches Monday, he was aware of injuries, star players and key matchups in evaluating the top teams in the field.”

Obama's  interview about the men's tournament will air Wednesday during the 12 p.m. SportsCenter. His full bracket will be available later today.