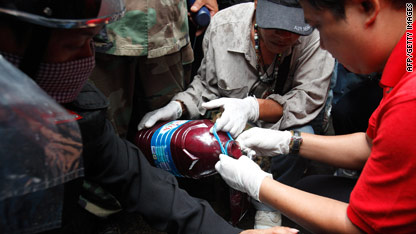 Protesters pour human blood into a plastic bag to be thrown during a protest in Bangkok.

An update from London on some of the stories we're expected to develop through the day Wednesday:

Bodies identified - Seventy-five soldiers killed in the World War I battle of Fromelles have been identified - the first of about 250 whose remains were discovered at the site more than a year ago.

END_OF_DOCUMENT_TOKEN_TO_BE_REPLACED

Family members of Ponzi schemer Bernard Madoff have filed motions to dismiss a $199 million lawsuit leveled against them last fall.