Sports Update: A few games, then... let the Madness begin 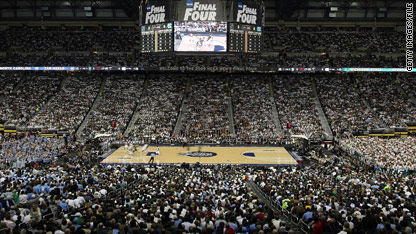 All sports will take a backseat for college hoops fans as March Madness gets set to kick off.

Relax. Rest up, people. Might as well enjoy your last 24 hours before the start of the NCAA Tournament. Plenty of sports to choose from today, including a Champions League match at Barcelona’s legendary Camp Nou. The highlights (all times Eastern):

- John Isner vs. Rafael Nadal, Round of 16, BNP Paribas Open in Indian Wells (3 p.m.-7 p.m., FSN): Gorgeous contrast of styles here with the 6-foot-9, hard-serving American (he’s ranked No. 20 in the world) against the counter-punching legend-in-the-making lefty (Nadal is 6-foot-1, in case you were wondering.)  Isner has quietly become the second-highest ranked American behind Andy Roddick.

- Spurs at Magic (8:00 p.m., ESPN): Tim Duncan and the Spurs might have lost a step from their championship days but it’s always fun to watch Magic center Dwight Howard tackle the NBA’s best big men. Orlando is 27-7 at home.

- Barcelona vs. Stuttgart (3:30 PM, FSC): After a 1-1 draw in the first leg in Germany, the Spanish giants looked poised to advance to the quarterfinals as the teams meet in the second leg of the Champions League knockout round. Defending champion Barcelona has beaten German teams eight consecutive times at the Camp Nou. Bordeaux is at home against Olympiakos in the other afternoon’s match.

.600 –batting average for Twins catcher Joe Mauer this spring. He has six hits in 10 at-bats with two RBI.

4 - Consecutive wins in the 1,100-mile Iditarod Trail Sled Dog Race for Lance Mackey, the only musher in the 38-year history of the Iditarod to win four consecutive races. Mackey crossed the finish line in Nome on Tuesday afternoon.