Ohio, a 14 seed in the Midwest region, knocked out third-seeded Georgetown 97-83.

Check out SI.com's tournament scoreboard, live blog, and a gallery of other first round tournament upsets.

The U.S. special envoy for Middle East peace is returning to the region this weekend as the United States continues its discussions with Israel over the Obama administration's demand that the country reverse its decision on construction in disputed territory in East Jerusalem.

Israeli Prime Minister Benjamin Netanyahu has spoken with U.S. Secretary of State Hillary Clinton, and they have discussed specific actions that might be taken to improve the atmosphere for progress toward peace, said State Department spokesman P.J. Crowley on Thursday.

END_OF_DOCUMENT_TOKEN_TO_BE_REPLACED

See highlights from the bill, read it in its entirety (PDF) or a section-by-section analysis (PDF)

The president had been set to depart Washington on Sunday, the same day that the House of Representatives is likely to vote on the measure.

END_OF_DOCUMENT_TOKEN_TO_BE_REPLACED

Face of Taliban justice: An Afghan shelter helps women like Bibi Aisha, whose husband cut off her nose and ears. (Graphic content)

Cornell deals with wave of student suicides: A wave of suicides at Cornell University in the past two semesters is a "public health crisis," the school's mental health initiatives director said.

Wal-Mart 'appalled' at racist announcement: New Jersey authorities are investigating an announcement made over a public address system at a southern New Jersey Wal-Mart telling "all blacks" to leave the store.

Two Pakistani men and a Romanian woman were charged in Spain on Thursday in connection with the kidnapping of a 5-year-old British boy in Pakistan.

END_OF_DOCUMENT_TOKEN_TO_BE_REPLACED

A retired U.S. general said Thursday that the Dutch policy of allowing openly gay soldiers to serve in its military led, in part, to its failure to halt the massacre of Muslims in the Bosnian town of Srebrenica in 1995.Â

Immediately afterward, the Dutch ambassador to the United States issued a sharp denial.Â

END_OF_DOCUMENT_TOKEN_TO_BE_REPLACED

The pilots of Northwest Flight 188 did not fall asleep when they overflew their destination by more than 100 miles in October, the National Transportation Safety Board said Thursday in a detailed report on the wayward flight.

The two pilots "became distracted by a conversation" about the airline's new work schedule system and by laptop computers they were using in violation of company policy and did not communicate with air traffic control for about 1 hour and 17 minutes while they cruised past their Minneapolis, Minnesota, destination at 37,000 feet, the NTSB said.

END_OF_DOCUMENT_TOKEN_TO_BE_REPLACED 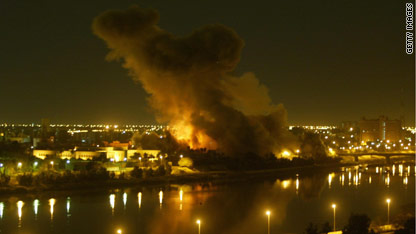 Smoke billowing from Baghdad shortly after the U.S.-led invastion of Iraq is launched.

It has been seven years since the United States and its allies launched Operation Iraqi Freedom at 9:34 p.m. ET/5:34 a.m. local time.Â  The anniversary will be marked with protests across the United States.

The Mideast 'quartet' â€“ the United Nations, the United States, the European Union, and Russia â€“ will meet in Moscow to discuss the stalled Israeli-Palestinian peace process.

A New York judge holds a 2 p.m. hearing on a proposed $657 million settlement for people who became ill after working on the World Trade Center site after the September 11, 2001 terrorist attacks.

A former New York City art gallery owner pleaded guilty Thursday to 29 counts of grand larceny and defrauding clients of about $120 million, according to the New York District Attorney's Office.

END_OF_DOCUMENT_TOKEN_TO_BE_REPLACED

Buying in select blue chips Thursday propelled the Dow to its eighth straight gain and the highest close in nearly 18 months, but the broader market churned as investors showed some reluctance after the recent rally.

END_OF_DOCUMENT_TOKEN_TO_BE_REPLACED

Federal aviation officials are proposing to fine American Airlines $300,000 for flying an airplane with a broken instrument on four occasions early last year in violation of Federal Aviation Administration regulations.

The proposed fine comes one week after the FAA proposed fines against the airline totaling $787,500 for three other alleged maintenance violations.

END_OF_DOCUMENT_TOKEN_TO_BE_REPLACED

A man who played a role in the 1968 hijacking of a Pan Am flight from New York to Puerto Rico pleaded guilty Thursday in federal court, the U.S. attorney's office.

END_OF_DOCUMENT_TOKEN_TO_BE_REPLACED

Early evidence points to driver error as the reason a 2005 Prius sped into a stone wall on March 9, federal investigators said Thursday.

END_OF_DOCUMENT_TOKEN_TO_BE_REPLACED

Alan Greenspan acknowledged Thursday that U.S. regulators had failed to grasp the magnitude of the financial crisis, but the former Federal Reserve chairman argued that low interest rates were not to blame.

END_OF_DOCUMENT_TOKEN_TO_BE_REPLACED

U.S. Park Police arrested a gay soldier and another man Thursday after they handcuffed themselves to the fence surrounding the White House in protest of the military's policy preventing gay and lesbian service members from serving openly.

The two men were charged with failure to obey a lawful order after they were warned to remove the handcuffs or face arrest, said Park Police Sgt. David Schlosser.

END_OF_DOCUMENT_TOKEN_TO_BE_REPLACED

Murray State, a 13 seed in the NCAA tournament, has just beaten fourth-seeded Vanderbilt in a stunning down-to-the-wire game. The final score was 66-65.

Check out SI.com's tournament scoreboard,Â live blog, and aÂ gallery of other first round tournament upsets.

At least one company and the National Republican Senatorial Committee have been issued subpoenas requesting documents in a federal grand jury investigation related to Sen. John Ensign, R-Nevada.

END_OF_DOCUMENT_TOKEN_TO_BE_REPLACED

Jesse James apologized to his wife Sandra Bullock and their family after facing allegations that he was unfaithful, according to a statement released to People.com.

"It's because of my poor judgment that I deserve everything bad that is coming my way," James said in the statement. "This has caused my wife and kids pain and embarrassment beyond comprehension and I am extremely saddened to have brought this on them. I am truly very sorry for the grief I have caused them. I hope one day they can find it in their hearts to forgive me."

END_OF_DOCUMENT_TOKEN_TO_BE_REPLACED

Christiane Amanpour will be leaving CNN to join ABC News.

â€śIâ€™m thrilled to be joining the incredible team at ABC News. Being asked to anchor â€śThis Weekâ€ť and the superb tradition started by David Brinkley, is a tremendous and rare honor and I look forward to discussing the great domestic and international issues of the day,"Amanpour said in a statement. I leave CNN with the UTMOST respect, love and admiration for the company and everyone who works here. This has been my family and shared endeavor for the past 27 years and I am forever grateful and proud of all that we have accomplished.â€ť

END_OF_DOCUMENT_TOKEN_TO_BE_REPLACED

Once abandoned in a farm shed, a rediscovered Anthony van Dyck painting has sold for over $3 million at auction. cnn.it/3RdRPiO
cnni

Once abandoned in a farm shed, a rediscovered Anthony van Dyck painting has sold for over $3 million at auction. cnn.it/3RdRPiO
cnni