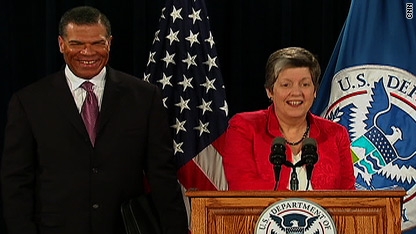 Postmaster says no to Saturday mail

Postmaster General John Potter is scheduled to present his plan to save the U.S. Postal Service billions of dollars, which includes ending Saturday mail delivery.┬Ā He'll present the plan to the Postal Board of Governors tomorrow, then to the Postal Regulatory Commission next week.┬Ā Both panels are expected to approve the plans, which would then go to Congress.┬Ā┬Ā

Two suspects arrested this week┬Āin connection with a 32-year-old string of killings┬Āwill be formally charged at an arraignment in Newark, New Jersey.┬Ā┬ĀLee Evans and his cousin Philander Hampton, both in their 50s, have been charged in connection with the alleged murders of five teenagers who were reported missing in Newark in 1978.┬Ā The suspects are being held on $5 million bail.┬Ā Read more

Russel Honor├®, remembered for his response to Hurricane Katrina, will assess US Capitol security cnn.com/2021/01/15/us/ŌĆ”O
sarasidnerCNN

11:35 am ET January 15, 2021 RETWEET
On the one hand itŌĆÖs nice to see normalcy in the airport. On the other hand this is nuts during a pandemic. https://t.co/4DJvkg3ola
sarasidnerCNN