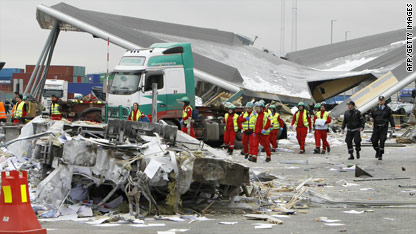 An out-of-control train derailed and headed downhill in Oslo, Norway on Wednesday.

[Updated at 10:24 a.m] Officials say three people were killed and four people were injured when an out-of-control train derailed and went downhill in Oslo, Norway.

The train operator, CargoNet, said in a statement on its Web site that 16 cars derailed in what it called a "serious" accident and that train traffic will remain affected throughout the day.

The National Accident Commission is on site and all train traffic to and from Alnabru has been stopped. Alnabru is the terminal where the train had been before it derailed.

[Posted at 10:20 a.m] At least three people in the Norwegian capital of Oslo died when a train derailed Wednesday, the city Fire Department said.

Several others were injured in the accident, which occurred as the out-of-control train was headed downhill in the western part of the city. One part of the train slammed into a storage building in the city's harbor area and some of its wagons ended up in the water, a department spokeswoman said.

Nine fire engines, 29 firefighters, ambulances and a helicopter responded to the accident. Ida Lofsgaard Kojedahl, the spokeswoman, said there was no immediate word on the cause of the accident.

At least two people are reported to have died as Britain was battered by severe weather with winds reaching speedsâ€twitter.com/i/web/status/1â€¦DH
cnni