The elderly wife of Latin jazz legend Eddie Palmieri was shot by her 81-year-old neighbor in New York on Tuesday after a long-standing feud over harassment and noise complaints, authorities said.

Maria Cartagena was charged with attempted murder, criminal possession of a weapon and assault, authorities said.

END_OF_DOCUMENT_TOKEN_TO_BE_REPLACED

Butler, a 11 seed, defeated one-seed Syracuse 63 to 59. Follow CNNSI.com for the latest scores and analysis. ┬Ā

END_OF_DOCUMENT_TOKEN_TO_BE_REPLACED

Russia and the United States have finished the main part of talks on a new arms-control treaty but have set no date to sign, representatives of both powers said Thursday.

END_OF_DOCUMENT_TOKEN_TO_BE_REPLACED

If Dennis Hopper attends the dedication of his star on Hollywood's Walk of Fame Friday, it may be the last time his fans see the actor alive.

Hopper is dying of prostate cancer, according to documents filed in his divorce case this week.

END_OF_DOCUMENT_TOKEN_TO_BE_REPLACED

Republicans have the right to be angry over the Democrat's health care bill, but "resorting to violent measures is exactly the wrong way to send a message," Republican National Committee Chairman Michael Steele said Thursday.

Blockbuster is 'bleeding to death': Blockbuster is in a heap of trouble with nearly $1 billion in debt, and its latest fixes might not be enough to keep the company from filing for bankruptcy.

Did Bush wipe hand on Clinton? Blockbuster is in a heap of trouble with nearly $1 billion in debt, and its latest fixes might not be enough to keep the company from filing for bankruptcy.

Actor Robert Culp dies after fall: Robert Culp, the actor who rose to fame as secret agent Kelly Robinson on the groundbreaking 1960s TV series "I Spy" and later played Ray Romano's father-in-law on "Everybody Loves Raymond," has died. He was 79.

Underwater search for Holloway remains ends: Aruban authorities have called off a dive team's search for the remains of Natalee Holloway after two days of searching the waters off Aruba proved fruitless, a spokeswoman for the Aruban prosecutor said Wednesday.

Where you should (and shouldn't) keep your cash: Advice from the experts.

Georgia's governor will pursue a lawsuit against the new federal health care bill, even if the state's attorney general refuses to do so, the governor's spokesman said Thursday.

END_OF_DOCUMENT_TOKEN_TO_BE_REPLACED

Authorities are no longer able to watch a video of scenes at a Georgia nightclub in the case of Pittsburgh Steelers quarterback Ben Roethlisberger because a digital video recorder system recorded over it, an attorney said Thursday.

Roethlisberger, who has been the starting quarterback for the Steelers for six seasons, has been accused of sexually assaulting a 20-year-old woman at a Georgia nightspot this month. He has not been charged.

END_OF_DOCUMENT_TOKEN_TO_BE_REPLACED

A member of the 1970s pop music group KC & the Sunshine Band has been arrested after a 17-year-old boy said he had sexual contact with the musician, authorities said.

END_OF_DOCUMENT_TOKEN_TO_BE_REPLACED

The president of a Venezuelan TV station that has been critical of leftist President Hugo Chavez was arrested Thursday at an airport on charges that he abused his right to free speech.

END_OF_DOCUMENT_TOKEN_TO_BE_REPLACED

An attorney for Toyota Motor Co. told a panel of federal judges Thursday that the company prefers to have the dozens of lawsuits filed against it nationwide consolidated into a single lawsuit, preferably heard in Los Angeles.

The suits were filed in the aftermath of reports of sudden unintended acceleration.

END_OF_DOCUMENT_TOKEN_TO_BE_REPLACED

Two teenagers were arrested after a shooting at a mall in Portland, Oregon, police said Thursday.

END_OF_DOCUMENT_TOKEN_TO_BE_REPLACED

A House Democrat said Thursday that an envelope containing unidentified white powder was sent to one of his district offices - the latest incident attributed to hostile debate over the health care reform bill.

Rep. Anthony Weiner and a New York Police Department spokesperson said a hazardous materials team was examining the powder that arrived in an envelope at Weiner's office in Kew Gardens, New York.

END_OF_DOCUMENT_TOKEN_TO_BE_REPLACED

Stocks give up gains, dollar rebounds

Stocks gave up gains Thursday, ending little changed, as a late-session bounce in the dollar sapped the strength out of a rally that had pushed the Dow, S&P 500 and Nasdaq near new 18-month highs.┬Ā

The Dow Jones industrial average added 5 points, or less than 0.1 percent according to early tallies. Earlier, it had risen as much as 119 points, to within 46 points of 11,000, before giving back most of those gains. The S&P 500 index lost 2 points, or 0.2 percent. The Nasdaq composite was little changed.

END_OF_DOCUMENT_TOKEN_TO_BE_REPLACED 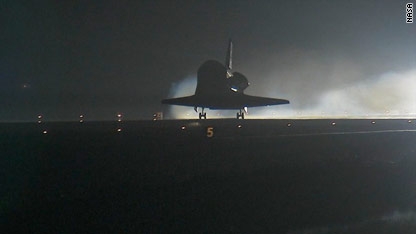 Space shuttle Endeavor lands at the Kennedy Space Center in Florida on February 21.

NASA managers will hold a review meeting to establish a firm launch date for Space Shuttle Discovery, which is currently scheduled for April 5.

Former Alaska Gov. Sarah Palin will appear at a fundraiser for her former running mate Sen. John McCain, R-Arizona,┬Ā in Phoenix, Arizona. It will be their first public appearance since the 2008 presidential campaign.

Ticket prices will be going up at movie theaters across the country this weekend as the entertainment industry looks to cash in on the growing demand for 3-D movies following the success of "Avatar"and "Alice in Wonderland." Starting Friday, prices for adult admission to 3-D movies will increase an average 8.3 percent at box offices nationwide, according to market research conducted by investment firm BTIG. Ticket prices for IMAX movies are expected to jump 10 percent, while prices for regular 2-D movies will rise about 4 percent on average.┬Ā Read more

President Barack Obama hit the road Thursday to sell the merits of the newly enacted health care law, telling an enthusiastic Iowa crowd that the measure will lead to greater economic security for most Americans.

END_OF_DOCUMENT_TOKEN_TO_BE_REPLACED

All 41 Republican senators have signed a letter warning President Barack Obama not to appoint a controversial nominee to a federal agency overseeing relations between unions and employers.

END_OF_DOCUMENT_TOKEN_TO_BE_REPLACED

The changes would not affect the new health care law signed Tuesday by President Barack Obama, and were not expected to prevent the "fixes" bill from winning congressional approval.

House GOP No. 2: Someone shot at my office

[Updated 1:49 p.m.] A Richmond police spokeswoman confirmed to CNN that a bullet was fired at Rep. Eric Cantor's campaign office.

"We are investigating the circumstance surrounding it," police spokeswoman Karla Peters said. Cantor disclosed the incident to reporters Thursday.

Cantor also accused Democrats of "fanning the flames" of violence by using threats that have been made against Democratic members "as political weapons." Democrats immediately hit back against Cantor's accusation, repeating their allegations that Republicans are at fault.

"We disagree with the charge made by Rep. Cantor today that Democrats are using acts of violence for political gain," said Brad Woodhouse, a spokesman for the Democratic National Committee.

END_OF_DOCUMENT_TOKEN_TO_BE_REPLACED

Phoebe Dynevor has confirmed that Daphne Bridgerton will not appear in Season 3 of NetflixŌĆÖs ŌĆ£Bridgertocnn.it/3WY1oUwDRuUck
cnni

10:00 pm ET January 30, 2023 RETWEET
For Donna Kelce, the success of both her sons will provide a conflict of interest -- as she officially becomes theŌĆtwitter.com/i/web/status/1ŌĆ”Os
cnni

Phoebe Dynevor has confirmed that Daphne Bridgerton will not appear in Season 3 of NetflixŌĆÖs ŌĆ£Bridgertocnn.it/3WY1oUwDRuUck
cnni

10:00 pm ET January 30, 2023 RETWEET
For Donna Kelce, the success of both her sons will provide a conflict of interest -- as she officially becomes theŌĆtwitter.com/i/web/status/1ŌĆ”Os
cnni