Robert Harding said Friday he has withdrawn his name from nomination as assistant secretary of the Department ofÂ  Homeland Security.

END_OF_DOCUMENT_TOKEN_TO_BE_REPLACED

Twenty-four civilians were killed on November 19, 2005, in what military prosecutors said was a house-to-house rampage by Marines after a roadside bomb killed their comrade, 20-year-old Lance Cpl. Miguel Terrazas. Wuterich is the remaining defendant of eight originally charged in the case.

END_OF_DOCUMENT_TOKEN_TO_BE_REPLACED

[Updated at 1:07 p.m.] The Yonhap News Agency is reporting that the South Korean navy ship has sunk, according to government officials.

[Updated at 12:26 a.m.] South Korea's president has told his military to focus on rescuing sailors from one of their navy ships sinking in the Yellow Sea near North Korea, aids told the Yonhap News Agency.

Yonhap reported 58 sailors had already been rescued. Navy vessels and helicopters were rescuing crew members, some of whom reportedly jumped into the sea after the blast, an official told South Korea's Korean Broadcasting System. The ship, the Cheonan, was patrolling southwest of the island around 9:45 p.m. when the explosion took place, a military official told KBS.

END_OF_DOCUMENT_TOKEN_TO_BE_REPLACED

Reid accidentally votes no on health care: Senate Majority Leader Harry Reid mistakenly called out "no" Thursday when asked for his vote on the health care reconciliation bill, setting the chamber howling with laughter.

At least 11 killed in Kentucky wreck: Ten people traveling in a van in southwestern Kentucky were killed Friday when a tractor-trailer crossed the median and smashed head-on into their vehicle, authorities said. The tractor-trailer driver also died.

Dog chews off cop car bumper: A dog that was caught on camera chewing off the bumper of a police cruiser is heading home. WTVC's Kevin Sims reports.

Chaos after semi crosses median: Officials say several people are dead after a tractor trailer crashed into another vehicle in Kentucky.

Doctor-starved: America's heartland in crisis: For one doctor practicing in America's heartland, the new health care law and its incentives to keep doctors on the farm is a start, not a solution, to the medical care crisis afflicting rural America.

The Marine Corps' top officer said Thursday that he would want to avoid housing gay and heterosexual Marines in the same rooms on base if the ban on gays openly serving in the military is lifted.

END_OF_DOCUMENT_TOKEN_TO_BE_REPLACED

Sarah Palin spoke out Friday at a rally for Sen. John McCain, urging voters to support the senator in his re-election bid in Arizona.

The rally, in Tuscon, Arizona, was their first joint public appearance since they conceded the 2008 presidential election.

END_OF_DOCUMENT_TOKEN_TO_BE_REPLACED

At least 11 killed in Kentucky wreck

[Updated, 7:24 p.m.] Ten people traveling in a van in southwestern Kentucky were killed Friday when a tractor-trailer crossed the median and smashed head-on into their vehicle, authorities said. The tractor-trailer driver also died.

It was the deadliest vehicle wreck in Kentucky in about 20 years, said Lt. David Jude, a spokesman for the Kentucky State Police.

END_OF_DOCUMENT_TOKEN_TO_BE_REPLACED

Stocks closed mixed Friday, at the end of another up week, as investors considered the Greek bailout package, reports of a naval conflict between North and South Korea and a weaker U.S. dollar.

The Dow Jones industrial average added a few points, according to early tallies. The S&P 500 index was little changed. The Nasdaq composite lost a few points.

END_OF_DOCUMENT_TOKEN_TO_BE_REPLACED

The decision preserves a key provision of the McCain-Feingold campaign reform act, which limits contributions to national, state, and local political parties. The case is likely to reach the Supreme Court in coming months.

END_OF_DOCUMENT_TOKEN_TO_BE_REPLACED

The managing director of the Abu Dhabi Investment Fund is missing after the sailplane in which he was traveling crashed into a lake in Morocco, the state news agency of the United Arab Emirates reported Friday.

Forbes' 2009 rankings of "The World's Most Powerful People" rated the missing sheikh at No. 27.
END_OF_DOCUMENT_TOKEN_TO_BE_REPLACED

A Chicago, Illinois, man was charged Friday with providing material support to al Qaeda by attempting to send the terrorist group funds overseas, the Department of Justice said.

END_OF_DOCUMENT_TOKEN_TO_BE_REPLACED

Extended jobless benefits will run out for about 212,000 Americans out of work after April 5 because the Senate closed up shop Friday afternoon without a deal to extend filing deadlines.

Senate Democrats and Republicans failed to agree on passing a House version of the extension of deadlines to apply for federal unemployment benefits and the COBRA health insurance subsidy.

END_OF_DOCUMENT_TOKEN_TO_BE_REPLACED

Dennis Hopper took what may be his final bow Friday as his star was dedicated on Hollywood's Walk of Fame.

His lawyer and doctor told the judge overseeing his divorce this week that Hopper is dying of prostate cancer, but the 73-year-old actor was smiling broadly during the ceremony.

END_OF_DOCUMENT_TOKEN_TO_BE_REPLACED

AT&T said Friday it will take a non-cash charge of about $1 billion for the current quarter in anticipation of costs resulting from the health care reform measure signed into law this week by President Obama.

END_OF_DOCUMENT_TOKEN_TO_BE_REPLACED

"The soldiers advanced in a proper operational manner and when the terrorists were seen moving westward, tanks that were stationed undercover opened fire," Galant said, according to IDF's Web site. "One of the terrorists approached the forces point blank and opened fire."Â

END_OF_DOCUMENT_TOKEN_TO_BE_REPLACED

He also is to serve 30 days in a halfway house. He will be required to serve 400 hours of community service and contribute $5,000 to a fund for victims of violence.

END_OF_DOCUMENT_TOKEN_TO_BE_REPLACED

Allawi's coalition gets most seats in Iraq election

END_OF_DOCUMENT_TOKEN_TO_BE_REPLACED

The founder of a MexicanÂ Catholic order sexually abused minor-age seminariansÂ and fathered three children with two women, the religious sect has revealed.

END_OF_DOCUMENT_TOKEN_TO_BE_REPLACED 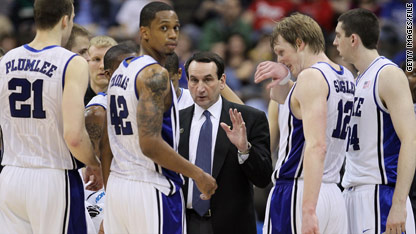 Duke, a top seed, faces off against Purdue, a four seed, late tonight.

Four more teams will advance to the Elite Eight tonight, and SI.com's Seth Davis weighs in below with what to expect. The highlights (all times Eastern):

-No. 6 Tennessee vs. No. 2 Ohio State (7:07 PM, CBS) Says Davis: "There was a very unusual stat in the first half of the Buckeyes' second-round game against Georgia Tech: Evan Turner took 15 shots in the first 20 minutes. That is very unlike him, and unlike Ohio State. This team has excellent offensive balance, and when Jon Diebler and William Buford get open looks they're almost impossible to defend. Turner took just four shots in the second half and Ohio State pulled away. Unlike Ohio U, the Buckeyes have a big man inside (Dallas Lauderdale) who can bang with Wayne Chism. I also don't think Tennessee will fare well against Ohio State's funky 1-3-1 zone."