The House January 6th committee's unexpected sixth hearing is underway and will include public testimony from a forâ€twitter.com/i/web/status/1â€¦LT

Putin: Attackers that killed 38 on subway 'will be destroyed' 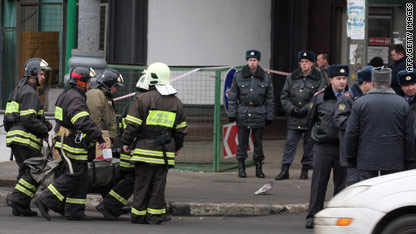 Rescuers and police officials stand outside of a train station after a bombing killed at least 35 people.

[Updated 8:45 a.m.] The death toll in the Moscow subway attacks now stands at 38, according to the country's Ministry of Emergency Situations.

"I am sure that law enforcement agencies will do everything to find and punish the criminals," Putin said.

Tuesday has been declared a day of mourning in Moscow in memory of the more than 35 people killed in the subway attacks, the mayor's press spokesman said.

Read full CNN.com story | Are you there? Send photos

"It was a terrorist act carried out by the female suicide bombers," said Moscow Mayor Yury Luzhkov, citing Russia's intelligence agency, the Federal Security Service. "They were specifically timed - for ... the train was nearing the station - to make the most damage.

A Web site associated with Chechen separatists claimed responsibility for the attacks. Chechnya is located in an area of Russia known as the North Caucasus, located between the Black and Caspian Seas. Forensic teams were combing wreckage from the underground blast for
clues.

"Our preliminary assessment is that this act of terror was committed by a terrorist group from the North Caucuses region," said Alexander Bortnikov of the Federal Security Service. "We consider this the most likely scenario, based on investigations conducted at the site of the blast.

"Fragments of the suicide bombers body found at the blast, according to preliminary findings, indicate that the bombers were from the North Caucuses region," he said.

The explosions killed at least 35 people and wounded 38 others, Russia's Emergency Situations Ministry said. The casualty tolls were fluctuating immediately after the blasts.

The first blast occurred at 7:56 a.m. at Lubyanka subway station, killing at least 23 people and injuring 18, the Ministry of Emergency Situations reported on its Web site. The Lubyanka station is near the Kremlin and Federal Security Service headquarters.

Another blast happened about 40 minutes later at Park Kultury station, on the same train line. The ministry reported 12 dead in the second explosion, with 20 more injured.

[Posted at 3:56 a.m.] More than 35 people have been killed and 40 injured in rush-hour explosions on Moscow's subway system. Female suicide bombers are believed to carried out the attacks at two subway stations.

The first explosion occurred about 8 a.m. at Lubyanka subway station, killing at least 23. The second blast happened about 30 minutes later at Park Kultury station, on the same line, killing 12.

Millions of commuters use the Moscow metro system every day. An estimated 500,000 people were riding trains throughout the capital at the time of the attacks.