Joseph and Mary in bed - obscene or illuminating? 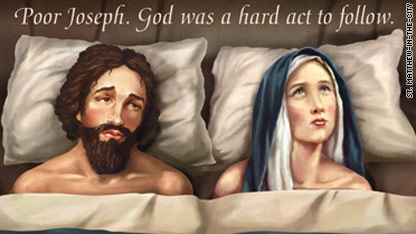 This billboard posted outside a church in Auckland, New Zealand, sparked a slew of complaints.

A billboard showing a somber Mary and Joseph laying in bed together with the caption "Poor Joseph. God was a hard act to follow," is controversial, but not obscene, according to a decision by New Zealand's Advertising Standards Authorities.

The billboard, posted outside St. Matthew-in-the-city Anglican Church in Auckland, New Zealand, sparked outrage and vandalism by locals who "consider the sexually and suggestive illustration of the nativity to be degrading to individuals and Christian groups," according to a complaint filed with the ASA regarding the billboard that was posted before Christmas last year.

The debate led to a slew of complaints being filed with the ASA over the nature of the billboard, to ensure it was not put up again.

"I consider it inappropriate for a child's perceptive of Christmas to be distorted in a perverse and sexual manner," the complaint said.

The billboard was put up in December, was vandalized, stolen and then put up again before being stolen yet again. The two billboards were up for a total of less than 12 hours before they were both taken, according to the complaint. Another two versions of the ad were later put up and also vandalized before being stolen, according to the complaint.

The church said while they know some people were offended by the billboard, others "found it amusing and thought-provoking but liberating as well."

"The billboard, while outraging what I believe to be a minority has managed to bring a discussion of religion and theology to kitchen tables in 177 countries if our Web site statistics can be believed," the church stated in its argument to the ASA.

Ultimately, the ASA agreed, saying because there were no naked people or sexual acts depicted on the billboard, while children could see it, they likely wouldn't understand it. The ASA ruled there were no ethical problems with the billboard which had been prepared with a "due sense of social responsibility" so offended adults were likely more angry because the billboard conflicted with their views of faith - not because of anything offensive or obscene in the billboard.

What do you think of the billboard? Did the church cross a line with the advertisement or is it perfectly acceptable?