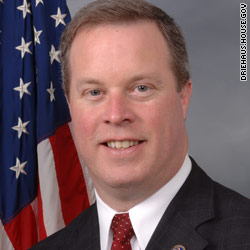 Rep. Steve Driehaus: The Ohio Democrat says that the protests outside his Cincinnati home have become "threatening" and "personal."

The Washington Post reports that half  the calls to the congressman's office last week thanked him for voting for health care legislation. The other half included death threats and personal attacks.

Driehaus told the newspaper, "The other side has waged a campaign of misinformation and fear, and that's what people are reacting to. I understand people are going to criticize my decisions - I'm an elected official - but my wife, my kids, my neighbors are out of bounds."

Debbie Landis: The president of a Reno, Nevada, grass-roots group called Anger is Brewing helped organize this past weekend's "Showdown in Searchlight," which some protesters dubbed "a conservative Woodstock."

Demonstrators marched to the hometown of Senate Majority Leader Harry Reid to show their displeasure toward big government and the recent passage of health care reform. The Las Vegas Sun reports that some 8,000 people took part.

Landis told the Sun, "We are peaceful, we are off our couch, and we are going to take this country back."

According to the Anger is Brewing Web site, the group has "anger" in its name because "Besides fear, anger is the only emotion that leads directly into action, and we are not afraid."

Various Tea Party Express groups are now on a "Just Vote Them Out!" 42-city bus tour and are scheduled to arrive in Washington, D.C., on April 15 - tax day.

Craig Becker: One of President Obama's recess appointments to the National Labor Relations Board quickly triggered intense opposition from business groups and Republicans, who called the appointee a radical who represents a White House gift to labor unions.

Obama announced Saturday that he will make recess appointments of 15 nominees to administration posts who are awaiting confirmation by the full Senate. None has generated nearly as much outcry as Becker, who is currently a general counsel for the Service Employees International Union and for the AFL-CIO. He has taught at the law schools of the University of Chicago and Georgetown University, among other places.

Last Thursday, all 41 Republican senators signed a letter urging Obama not to appoint Becker, saying it would "bypass the advice and consent traditions of the Senate."

Adams, a Democrat, told the New York Daily News, "Children will be children. But as adults, we need to be on record and tell them they're doing something wrong."

The image on each billboard, which goes up Monday, is of two young men whose pants hang low enough to reveal their underwear, accompanied by the messages "Stop the Sag!" and "We are better than this!"

Adams is a former New York Police Department captain and co-founder of the organization 100 Blacks in Law Enforcement Who Care.

J.D. Shapiro: The first screenwriter of the flop movie "Battlefield Earth" wrote in Sunday's New York Post, "Out of all the sucky movies, mine is the suckiest."

The newspaper reports that the blockbuster bomb, based on the novel by Scientology founder L. Ron Hubbard, recently won the Razzie for "Worst Movie of the Decade." Shapiro, who also wrote the screenplay for "Robin Hood: Men in Tights," picked up the award in person.

In the New York Post essay, Shapiro apologizes to anyone who saw the movie, which starred John Travolta, and explains he was eventually fired as screenwriter when he refused to incorporate changes desired by the film's producers into the script.

He writes, "Out of all the books L. Ron wrote, this was the one the church founder wanted most to become a movie. He wrote extensive notes on how the movie should be made."