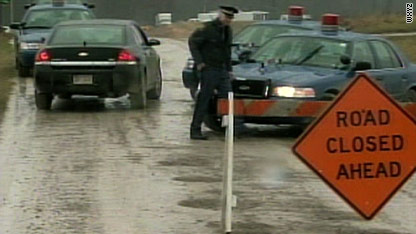 Authorities in Michigan conduct a raid on the militia known as the Hutaree.

Arrests after federal raid - Federal authorities plan to unseal charges Monday against several people arrested in a series of weekend raids in Michigan, Ohio and Indiana, prosecutors in Detroit said Sunday. A Christian militia group called the Hutaree was thought to be the target of the raid. The group proclaims on a Web site that it is "preparing for the end time battles to keep the testimony of Jesus Christ alive." Our reporters give you the latest from the first courtroom appearance for those arrested and will dig through the documents when they are unsealed.

North Carolina severe weather - Emergency management officials will fan out across North Carolina on Monday to survey the damage from severe storms that lashed the state Sunday evening. Residents reported as many as eight tornadoes touching down - overturning mobile homes, ripping out trees and plunging neighborhoods into darkness.

Subway security boosted after Moscow blasts - New York police are stepping up security in the subway system after today's subway bombings in Moscow, Russia. At least 38 people are dead in the Russian capital, and Chechen separatists are suspected.

California child killed - A former Sunday school teacher is due in court Monday, facing allegations that she killed and raped an 8-year-old girl and stuffed her body in a suitcase. Melissa Huckaby is charged in the death of Sandra Cantu, who was a friend of her daughter.

Obama Afghanistan trip - President Obama is due back in WashingtonÂ on MondayÂ morning after an unannounced visit to Afghanistan this weekend. He met with the Afghan president and reiterated the U.S. commitment to wipe out terror networks and our reporters will give you the latest when they are debriefed about his trip. Obama rallied about 2,000 coalition forces and allied troops at the major U.S. base in Afghanistan telling them, "Those folks back home are relying on you."