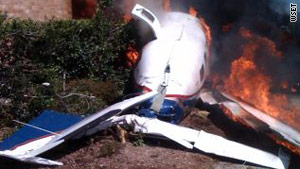 A small plane crashed near Roanoke Regional Airport in Virginia.

It's believed that the plane was arriving at the airport when it reported to the control tower that it was having some trouble, Wallace said. The reasons for the plane's problems were not immediately known, she said.

Two people were believed to be on board the aircraft. A fire at the site of the crash has been put out, Wallace said, and crews continued to work the scene.

[Posted at 1:23 p.m.] A small private plane crashed outside of the Roanoke Regional Airport in Virginia, near a UPS facility, an airport spokeswoman said.

People with a higher consumption of dairy fat have a lower risk of cardiovascular disease than those with low intakâ€twitter.com/i/web/status/1â€¦vP
cnni