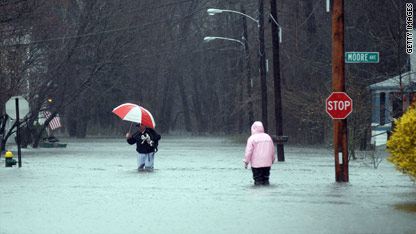 Northeast floods - Battered by a major rainstorm that shut down roads, forced evacuations and prompted President Obama to declare a state of emergency, the tiny state of Rhode Island may be in for more misery Wednesday. All eyes are on the Pawtuxet River,Â which runs through Cranston and is predicted to crest Wednesday morning near 20 feet. Flood stage is 9 feet, an official said.

Obama energy policy - President Obama will announce plans Wednesday to open large sections of the eastern Gulf of Mexico and an area off the Virginia coast for oil and natural gas drilling.

The GOP has long championed additional domestic drilling to lessen America's dependence on outside energy sources. And while the plan could help win Republican support for other White House initiatives, it won't find many fans among environmentalists. The proposal includes lifting a 20-year ban on drilling off the Virginia coastline.

Detroit militia - Federal authorities arrested members of the Hutaree militia group upon learning that they were planning an exercise in April that might have included violence, a federal prosecutor said Tuesday. "They talked about doing a covert reconnaissance exercise," said Barbara McQuade, U.S. attorney for the eastern district of Michigan, in an interview with CNN's Drew Griffin. "And they did also say that, in connection with the exercise, if they came upon anyone from the public or law enforcement who kind of stumbled upon them in the midst of this exercise, they were prepared to kill them."

A bond hearing is set for 1 p.m. Wednesday, where arrest records are expected to be unsealed. We'll bring you the latest from the courtroom and from the newly released documents as soon as we have them.

"D.C. 5" trial in Pakistan –– Five Americans accused of plotting attacks on Pakistan face up to life imprisonment in a terror trial that opened Wednesday in the city of Sargodha.

The men, who have been called the "D.C. 5" because they all lived in the region around the U.S. capital, have been charged with severalÂ  terrorism-related counts including criminal conspiracy to commit terrorism and waging war against Pakistan and its allies.

12:30 am ET May 23, 2022 RETWEET
More cases of a rare disease have been reported worldwide, including in the United States -- where one health officâ€twitter.com/i/web/status/1â€¦Gd
cnni

11:30 pm ET May 22, 2022 RETWEET
Much like Dorothy in "The Wonderful Wizard of Oz," the artist behind Ghana's "Yellow Brick Road" is motivated by aâ€twitter.com/i/web/status/1â€¦Xh
cnni