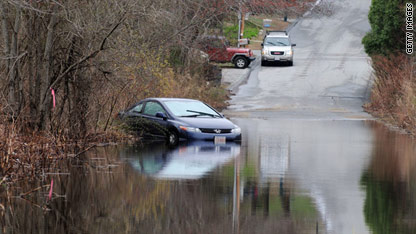 Rhode Island floods - A flood-weary Rhode Island surveyed the damage as waters started receding, with officials saying Thursday the long-term recovery could take months. The Northeast, particularly Rhode Island, battled flooded roads and basements for most of the week. Many of the schools in the region remained closed Thursday.

Doctor killer's sentencing - Scott Roeder, who gunned down one of the nation's few late-term abortion providers and is facing life in prison, gets an opportunity to speak at his sentencing on Thursday at 10 a.m. and we'll be carrying it live. Roeder also has asked some longtime friends to testify as character witnesses. The 52-year-old was convicted in January of first-degree murder and aggravated assault in the May 31 death of Dr. George Tiller at the doctor's church.

Under Kansas law, Roeder faces, at aÂ minimum, a mandatory life sentence with the possibility of parole after 25 years. A judge must decide whether to impose a harsher sentence sought by prosecutors requiring Roeder to serve at least 50 years before being considered for parole.

Iraq elections - A controversial committee that nearly derailed the Iraqi election in January has resurfaced. Led by Ahmed Chalabi, a former ally of the Pentagon, the committee this week announced that six winning candidates in the March 7 parliamentary election are connected to the former regime of Saddam Hussein and must be disqualified.

Critics say it's no coincidence - disqualifying them will erase the lead of secular candidate Ayad Allawi and his Iraqiya alliance of Shiites and Sunnis. Allawi's electoral list won 91 seats in parliament and topped the State Of Law coalition of Prime Minister Nuri al-Maliki, which won 89 seats.

Singer Adele fought back tears in a video on Instagram explaining that despite a scramble to make it work, she hasâ€twitter.com/i/web/status/1â€¦wc
cnni

9:59 pm ET January 20, 2022 RETWEET
US President Biden held a news conference on Wednesday to mark the end of the first year of his presidency. Here'sâ€twitter.com/i/web/status/1â€¦1q
cnni

9:50 pm ET January 20, 2022 RETWEET
The US will require essential travelers crossing into the United States via land ports of entry and ferry terminalsâ€twitter.com/i/web/status/1â€¦HH
cnni