Kremlin critic Alexey Navalny is ordered to remain in custody, less than 24 hours after he was arrested on his retuŌĆtwitter.com/i/web/status/1ŌĆ”x0

Samsung vice chairman Lee Jae-yong is going back to prison, casting the future of leadership at the massive tech coŌĆtwitter.com/i/web/status/1ŌĆ”Sf

China's economy grew 2.3% in 2020 even as the rest of the world was upended by the coronavirus pandemic, accordingŌĆtwitter.com/i/web/status/1ŌĆ”1f

An Army reservist who federal investigators say has secret-level security clearance and a long record of posting hiŌĆtwitter.com/i/web/status/1ŌĆ”1I

A University of Kentucky senior was charged in connection with the US Capitol riot, an FBI affidavit shows. She wasŌĆtwitter.com/i/web/status/1ŌĆ”vh

A New Mexico man who had been wanted for his alleged role in the January 6 riot was arrested Sunday blocks away froŌĆtwitter.com/i/web/status/1ŌĆ”vt 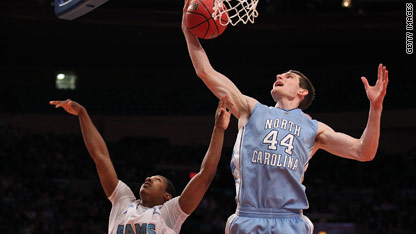 UNC has a chance for back-to-back titles -- but not how they want. The defending NCAA champs go for the NIT title tonight.

We've rarely seen a more brutal week in soccer, with Arsenal captain (and Spain star) Cesc Fabregas fearing a broken leg following a 2-2 Champions League quarterfinal draw against Barcelona and England star Wayne Rooney expected to be out for two to four weeks after spraining his ankle in the final moments of Bayern Munich 2-1 win over Manchester United's in the Champions League quarterfinal first leg. With most of European soccer resting today, soccer fans can get a fix tonight with a pair of MLS games, and sports fan also have plenty of other fare to choose from including the NIT Finals. Some highlights: (All times Eastern):

-NIT Finals: North Carolina vs. Dayton (ESPN, 7:00 p.m.)
No college basketball team has followed up an NCAA national championship with an NIT crown the next year but North Carolina is on the verge of creating some interesting history. "Let's be honest, this was not where we wanted to be," North Carolina coach Roy Williams told reporters Wednesday. "Everybody wanted to be in the NCAA tournament." Dayton has defeated Illinois State, Cincinnati, Illinois and Mississippi to earn its trip to the finals. The Flyers last won an NIT title in 1968; North Carolina won this title three years later.

-Thrashers at┬Ā Capitals (Versus, 7:00 PM)
Atlanta is in a brutal race with Boston and New York for the final playoff spot in the Eastern Conference and with five games left, they need as many points as possible. The Thrashers are currently in ninth place, two points behind Boston. Tonight, they'll face a Capitals team who has beaten them six consecutive times. Washington has already clinched the top seed in the East.

-Real Salt Lake vs. Houston Dynamo (ESPN2, 9:00 p.m.)
Defending champion Real Salt Lake – a surprise winner in the championship last season over Los Angeles –won its opening match this season, a 3-0 rout over San Jose in which Javier Morales scored twice. Now comes a road test against Houston, who opened the season with a 1-1 tie against FC Dallas. Later in the night (11PM, ESPN2), the Galaxy plays Chivas USA at The Home Depot Center in the first installment of the SuperClasico.

188-54
Record of Pittsburgh coach Jamie Dixon in his seven seasons at the school. Yesterday, the school announced that Dixon would get a two-year contract extension, meaning Dixon is under contract for the next eight seasons.

13
Major league players who have hit 20 homers at or before their age 20 season, including Ken Griffey Jr. and Alex Rodriguez. The much-talked about Braves rookie Jason Heyward is 20 years old.

BREAKING: Kremlin critic Alexey Navalny is ordered to remain in custody, less than 24 hours after he was arrested oŌĆtwitter.com/i/web/status/1ŌĆ”Ll
cnni

9:03 am ET January 18, 2021 RETWEET
Lionel Messi was shown the first red card of his Barcelona career, as Ronald Koeman's side suffered a 3-2 extra-timŌĆtwitter.com/i/web/status/1ŌĆ”vR
cnni

8:51 am ET January 18, 2021 RETWEET
Today's "Blue Monday" depression peak isn't real, but seasonal blues are. Here's what to do about themŌĆtwitter.com/i/web/status/1ŌĆ”Ao
cnni