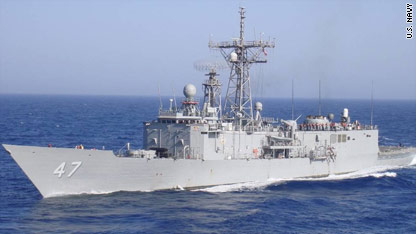 The USS Nicholas came under fire from a pirate vessel and then captured it.

A U.S. warship sank a pirate skiff and captured a pirate mother ship in the Indian Ocean on Thursday, according to a statement from U.S. Naval Forces Africa.

The frigate USS Nicholas came under fire from a pirate vessel shortly after midnight in international waters west of the Seychelles, according to a U.S. military statement.

The Nicholas returned fire and pursued the skiff as it fled, capturing it about 90 minutes later. Three suspected pirates aboard the skiff were taken into custody, along with two others aboard a suspected pirate mother ship that was nearby.

11:38 am ET May 7, 2021 RETWEET
Federal civil rights violation charges including Chauvin and the 3 officers with him. apnews.com/article/6d87b9â€¦
susancandiotti

9:56 am ET May 7, 2021 RETWEET
Some SNL cast members arenâ€™t happy about Elon Musk. Heâ€™s part of a long tradition of disliked hoswashingtonpost.com/arts-entertainâ€¦2GMF
susancandiotti