Extended unemployment benefits will temporarily expire for thousands of Americans on Monday because the Senate went on its spring recess without approving a one-month deadline extension.

END_OF_DOCUMENT_TOKEN_TO_BE_REPLACED

Apple said it sold 300,000 iPads in the United States on the first day the highly anticipated tablet device was available.

END_OF_DOCUMENT_TOKEN_TO_BE_REPLACED

10:00 am ET - Casey Anthony hearing -┬ĀLawyers in the case of Casey Anthony, the Florida woman accused of killing her two-year-old daughter, are expected to argue over access to records from Texas EquuSearch.

END_OF_DOCUMENT_TOKEN_TO_BE_REPLACED 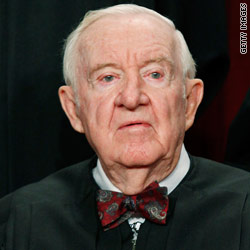 The Supreme Court justice┬Ātold┬Ātwo newspapers he will soon decide whether to step down after 35 years as the leader of the liberal wing of the nation's highest court.

Stevens' comments┬Āin┬ĀSaturday's New York Times and Washington Post amplify what he told CNN senior legal analyst Jeffrey Toobin on March 8 - that he would make up his mind about retirement in about a month.

Stevens was named to the court by Republican President Gerald Ford in 1975. Since then, he's sided with the liberal wing of the court in civil rights cases, among other issues.

ŌĆ£IŌĆÖve confessed to many people that I think my personal experience has had an impact on what IŌĆÖve done,ŌĆØ he told The New York Times. ŌĆ£Time and time again, not only for myself but for other people on the court, during discussions of cases you bring up experiences that you are familiar with.ŌĆØ

New York Times: Stevens contemplates law, and how to leave it

Golf and texting legend Tiger Woods is scheduled to appear at a news conference today at Augusta National Golf Club in Georgia, the site of this weekŌĆÖs Masters Tournament. Payne, the club's chairman, welcomed the return of the sport's top draw last month.

"We support Tiger's decision to return to competitive golf beginning at this year's Masters Tournament," Payne said in a statement shortly after the announcement that Woods would play again. "Additionally, we support and encourage his stated commitment to continue the significant work required to rebuild his personal and professional life." Woods' return will end a self-imposed exile that followed his admission of extramarital affairs.┬Ā

Payne gained international prominence when he led Atlanta's long-shot bid to land the 1996 Centennial Olympics. USA Today reported that during that successful effort, he was unable to add golf to the Olympics program, as he had hoped.

The newspaper reported that the proposal failed amid protests over the fact that Augusta National had an all-white, all-male membership for most of its history. Augusta admitted its first African-American member in 1990, and has no female members at this time.

The White House has invited 30,000 people from all 50 states to the South Lawn on Monday for this yearŌĆÖs Easter Egg Roll.

Time magazine reports that readers on the Storytime┬ĀStage will include J.K. Rowling, Reese Witherspoon, Apolo┬ĀOhno, Mariska Hargitay, Elmo and Maria of Sesame Street and DeGeneres, the author of two books, "Love, Ellen: A Mother/Daughter Journey" and "Just a Mom."

A presidential tradition that dates back 100 years will continue Monday: President Obama is scheduled to throw out the first pitch before the Washington Nationals take on the Philadelphia Phillies at Nationals Park.

MLB.com reports that Obama will be pitching today to Zimmerman, the NationalsŌĆÖ third baseman. According to Jockbio.com, ŌĆ£Ryan is perhaps the only player on the Nationals' roster worth the price of admission.ŌĆØ

John Odell, curator of history and research at the Baseball Hall of Fame in Cooperstown, New York, said President William Howard Taft was the first to throw an Opening Day pitch, in Washington in 1910.

"A first pitch says a lot about how a president ought to behave," Odell told CNN. "We want him to take the job seriously, but not so seriously that he can't take a few hours to come out and be a regular guy like the rest of us and enjoy our national pastime."

CNN: Obama will take to mound for presidential tradition

Michael Jackson's last doctor may learn Monday whether his California medical license will be suspended while he faces trial in the pop star's death. California's medical board will ask the judge to order Murray not to practice medicine as a condition of his bail when he appears in a Los Angeles court Monday.

When Murray pleaded not guilty to involuntary manslaughter in February, a judge prohibited him from using any anesthesia on patients, but he refused the prosecution's request to suspend his license. The state is trying again with a new judge in charge of the case.

Murray currently has no California patients, although he has resumed his medical practices in Houston, Texas, and Las Vegas, Nevada, defense lawyer Ed Chernoff┬Āsaid. The suspension of his California license would have a "domino effect" on his practices in other states, Chernoff said.

[Updated 7:34 a.m.] Two employees of the U.S. consulate in Peshawar, Pakistan are among those who were killed in a blast near the consulate on Monday, the U.S. Embassy in Islamabad said.

The employees were Pakistani, the embassy said.

END_OF_DOCUMENT_TOKEN_TO_BE_REPLACED 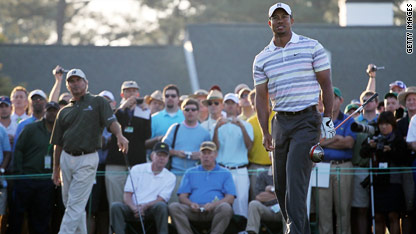 Tiger Woods tees off during his first practice round Monday in Augusta, Georgia.

HereŌĆÖs a look at some of the stories CNN.com reporters are working on Monday:

Tiger Woods' return - Golfing phenom Tiger Woods plans to return to the Masters on Monday, his first major tournament since he wrecked his car under unusual circumstances┬Āin November. Woods admitted to having extramarital affairs. Now he's back on the golf course. He was scheduled to practice Monday morning and give a news conference at 2 p.m. ET.

END_OF_DOCUMENT_TOKEN_TO_BE_REPLACED

An update from London on some of the stories we expect to develop on Monday:

Miners rescued - More than a week after their coal mine in northern China was flooded by a rush of underground water, 114 miners were pulled out alive Monday. Read the full story.

END_OF_DOCUMENT_TOKEN_TO_BE_REPLACED

As allegations of sexual abuse by Catholic priests started piling up in the Netherlands earlier this year, Bert Smeets, a 58-year-old Dutch musician, decided to launch an organization to bring victims of church abuse together.

END_OF_DOCUMENT_TOKEN_TO_BE_REPLACED

Michael Jackson's last doctor may learn Monday whether his California medical license will be suspended while he faces trial in the pop star's death.

END_OF_DOCUMENT_TOKEN_TO_BE_REPLACED

With an average of 3.1 million doses of Covid-19 vaccine administered each day, the US is on pace to hit another vaŌĆtwitter.com/i/web/status/1ŌĆ”BO
cnni

5:45 am ET April 13, 2021 RETWEET
"From a glance at British media over the past few days, you could be forgiven for thinking that the entire UK is inŌĆtwitter.com/i/web/status/1ŌĆ”A0
cnni