Reaction to mine disasters: Wake-up calls, cries for action 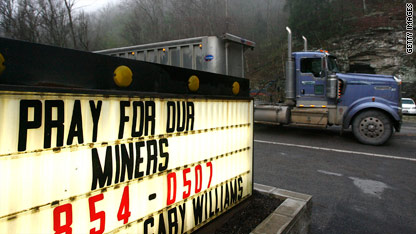 An explosion at a Massey Energy Co. coal mine in West Virginia killed at least 25 workers, the deadliest U.S. mining disaster in 25 years. It came days after five miners were killed and 115 were rescued in northern China when a rush of underground water flooded the Wangjialing coal mine.

The two recent disasters on opposite sides of the world raise these questions - why do these incidents keep happening, when will we learn from them and how can we stop them?

For Davitt McAteer, the former head of the U.S. Mine Safety and Health Administration during the Clinton administration, the answer is clear. McAteer, who investigated the 2006 Sago mine disaster, also in West Virginia, said the government and coal companies must have more transparency regarding mine safety issues, according to West Virginia Public Broadcasting.

“We are not doing enough, nationwide. Four hundred fifteen active underground mines nationwide are required to have added better communication systems. As of two weeks ago, only 34 had installed fully operational systems of communication.

McAteer isn't the only one saying enough isn't being done to protect those who risk their lives each day.

Nobody knows what happened in West Virginia, or if any of the previous problems will come into play.

The West Virginia Gazette's Coal Tattoo blog, which covers "Minings mark on our world," says this week's incident highlights the Mine Improvement and New Emergency Response Act's reforms, which legislators enacted after the Sago disaster to try to protect miners.

The reforms, the blog reports, were supposed to create sealed off areas that would contain air that would be breathable in a disaster - similar to the rescue chamber in the Upper Big Branch mine where Monday's explosion occurred. But a federal official told reporters at the West Virginia disaster scene, according to The Washington Post, that he didn't think the miners had time to make it to the chamber.

About two weeks ago, the main blogger on Coal Tattoo, Ken Ward Jr., reported about one in 10 coal mines nationwide had the upgraded communication tools that were asked for under the reforms.

"West Virginia is doing a little better. About 16 percent of the state's underground mines have installed and fully operational systems. But because of the state's larger number of underground mines, that percentage still means that 121 mines here do not have advanced communications and tracking. Twenty-three out of 144 West Virginia mines have complied, according to the MSHA data."

The sentiment on the blog following Monday's explosion echoed a still-growing frustration with where safety regulations stand and a troubling lack of understanding for who needs to step up.

It's a feeling happening in China, too. Amid the overwhelming relief of the miracle rescue of most miners came a slew of editorials in the China Daily newspaper arguing the disaster was another "déjà vu" moment that hasn't taught the country any lesson.

"Why have similar accidents failed to teach coalmine leaders a lesson about work safety?

"Work-safety watchdogs and government departments must find an answer to this and find out a way to make coalmine owners or officials consider work safety a top priority."

As officials investigate the disasters in China and West Virginia, it's clear the public's anger and demand for increased safety comes down to one thing - being able to prevent needless deaths - such as 62-year-old Benny Willingham, who was killed Monday in West Virginia. His relatives say they, like almost all miners and their families, knew the risks but it doesn't make his death any easier to accept or stop the need for changes.

"It's scary. It's just really, really scary," said Tiffany Ellis, Willingham's granddaughter. "My stepdad also does this, and this is just a wake-up call to me. I've seen it happen before, but I never imagined I'd be here today, telling my story about it."

The big question is will it be a wake-up call for others as well?