Official: Air inside mine appears safe

[Updated at 9:30 p.m.]Â  "We've seen a steady drop, a slow drop," Kevin Stricklin, an administrator for the federal Mine Safety and Health Administration, told reporters about the concentrations of the three explosive gases. "The numbers now indicate that we're out of the explosive range."The decision to send rescue teams inside will be made if samples taken from the bottom of the mine confirm the initial results, he said.

"Our first intent is to look for the four miners that are unaccounted for," he said.

Six five-person rescue teams were on standby and ready to move, he said.

END_OF_DOCUMENT_TOKEN_TO_BE_REPLACED

President Barack Obama headed to the Czech Republic on Wednesday night to meet with Russian President Dmitry Medvedev and sign an arms control agreement that reduces the nuclear stockpiles of both nations.

The new Strategic Arms Reduction Treaty (START) to be signed Thursday by the two leaders builds on a previous agreement that expired in December.

END_OF_DOCUMENT_TOKEN_TO_BE_REPLACED

5 more charged in alleged rape of 7-year-old: Police in Trenton, New Jersey, on Saturday announced more arrests in the case of a 15-year-old girl who allegedly allowed men to have sex with her and her 7-year-old stepsister for money.

Man kills his alleged abuser:A California man pleaded no contest to voluntary manslaughter with the use of a gun Tuesday in the shooting death of a man who he claimed sexually abused him as a teen, a prosecutor said.

Doctors perform C-section, find no baby: How do doctors get to the point of performing a C-section on a woman who isn't pregnant? HLN's Prime News reports.

Inmates: Mom spoke of 'knocking out' Caylee: woman who befriended Casey Anthony in jail told investigators that Anthony confided she would "knock out" her 2-year-old daughter, Caylee, so she could go out at night while the child slept, according to a police report.

Stocks tumbled Wednesday following a report that consumer borrowing fell and General Motors said it lost billions of dollars during the second half of 2009.

END_OF_DOCUMENT_TOKEN_TO_BE_REPLACED

General Motors reported $3.4 billion loss in the fourth quarter of 2009, but is on track to possibly return to profitability in 2010, the company said Wednesday.

END_OF_DOCUMENT_TOKEN_TO_BE_REPLACED

Consumer borrowing dropped in February, after increasing for the first time in a year during the previous month, according to a government report released Wednesday.

Total consumer credit fell a seasonally adjusted $11.5 billion, at an annual rate of 5.6%, to $2.448 trillion in February, the Federal Reserve reported.

END_OF_DOCUMENT_TOKEN_TO_BE_REPLACED

Police have completed their investigation into allegations that NFL star Ben Roethlisberger sexually assaulted a 20-year-old woman in Milledgeville, Georgia, they said Wednesday.

Officers have turned over the results of their investigation to District Attorney Fred Bright "for review and appropriate action," the Georgia Bureau of Investigation, the Milledgeville Police Department and Bright said in a statement.

END_OF_DOCUMENT_TOKEN_TO_BE_REPLACED

Greenspan: 'I was right 70 percent of the time'

Alan Greenspan acknowledged Wednesday that mistakes were made during his long tenure as chairman of the Federal Reserve, but he argued that the low interest rate policy he championed at the central bank didn't inflate the housing bubble.

In testimony before the Financial Crisis Inquiry Commission, Greenspan said the recent financial meltdown was possibly "the most severe in history." He admitted that regulators failed to grasp the severity of the crisis, but he maintained that his policies and predictions were correct most of the time.

END_OF_DOCUMENT_TOKEN_TO_BE_REPLACED

The Afghan and U.S. governments played down their political differences Wednesday, rejecting reports of a major dispute between the Obama administration and President Hamid Karzai.

Supportive statements by the U.S. State Department and Karzai's spokesman followed a week of increasing tension between the governments. On Tuesday, the White House indicated it could call off a scheduled May 12 visit by Karzai to Washington.

END_OF_DOCUMENT_TOKEN_TO_BE_REPLACED 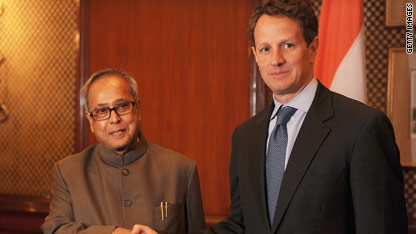 Treasury Secretary Timothy Geithner met with his Indian counterpart in New Delhi this week. He heads to China on Thursday.

Treasury Secretary Timothy Geithner heads to Beijing to meet with China's Vice Premier Wang Qishan. The focus of the talks is unclear.Â  However, it's expected that the value ofÂ  China's currency, the yuan, could be the main topic of their discussion. Read more

END_OF_DOCUMENT_TOKEN_TO_BE_REPLACED

A man has been arrested for allegedly threatening House Speaker Nancy Pelosi, the FBI announced Wednesday.

FBI spokesman Joseph Schadler said the arrest occurred in San Francisco, California, where Pelosi's home district is located. He identified the suspect as Gregory L. Giusti, but no further details were immediately available.

END_OF_DOCUMENT_TOKEN_TO_BE_REPLACED

News agency: Palestinian boy who was reported killed is alive and well

A 15-year-old boy who Palestinian sources said was shot to death in Gaza in late March is alive and well, a Palestinian news agency reported this week.

A Palestinian medical source had reported that the boy was shot to death at the Rafah airport on March 30, a day when Palestinian demonstrators clashed with Israel Defense Forces.

But it turns out that the boy had been among 17 Palestinians detained by Egyptian forces after the Palestinians entered the Egyptian side of an underground smuggling tunnel, the independent Palestinian news agency Maan reported Sunday.

Egypt returned the detainees to Palestinian border security personnel on Friday, according to Maan.

END_OF_DOCUMENT_TOKEN_TO_BE_REPLACED

Arrest made after devices found in Texas mailboxes

Federal authorities in Texas arrested a person Wednesday who they believe is responsible for putting "quite a few" suspicious devices, including those that resemble pipe bombs, in mailboxes in the eastern portion of the state, an official said.

END_OF_DOCUMENT_TOKEN_TO_BE_REPLACED

Attorney General Eric Holder signed a treaty with Algeria on Wednesday that he hopes will help combat terrorism in an area crucial in the battle against violent extremists. During a visit to Algiers, Holder signed the pact with Algerian Minister of Justice Tayeb Belaiz.

END_OF_DOCUMENT_TOKEN_TO_BE_REPLACED

McDonnell: Not mentioning slavery was 'a mistake'

"The failure to include any reference to slavery was a mistake, and for that I apologize to any fellow Virginian who has been offended or disappointed," McDonnell said in a written statement. "The abomination of slavery divided our nation, deprived people of their God-given inalienable rights, and led to the Civil War. Slavery was an evil, vicious and inhumane practice which degraded human beings to property, and it has left a stain on the soul of this state and nation. In 2007, the Virginia General Assembly approved a formal statement of 'profound regret' for the Commonwealth's history of slavery, which was the right thing to do.

McDonnell also noted that while Virginia had been the Capitol of the Confederacy, it was also the first state in the nation to elect an African-American governor. "America's history has been written in Virginia," McDonnell said. "We cannot avoid our past; instead we must demand that it be discussed with civility and responsibility."

[Posted at 3:47 p.m.] For the first time in eight years, Virginia's Republican governor has issued a proclamation declaring April as Confederate History Month in the state, drawing criticism from Democrats and a civil rights group.

END_OF_DOCUMENT_TOKEN_TO_BE_REPLACED

Official: W. Virginia mine too dangerous for rescuers

Samples taken from inside the Upper Big Branch South Mine show that levels of dangerous gases are still too high to allow rescuers inside, a mining official said Wednesday.

END_OF_DOCUMENT_TOKEN_TO_BE_REPLACED 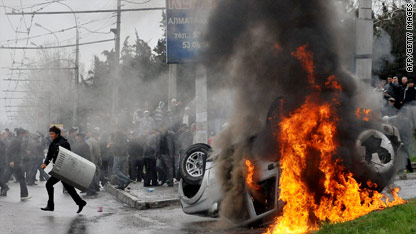 Opposition supporters clash with police during an anti-government protest in Bishkek, Kyrgyzstan.

For more updates on the situation in Kyrgyzstan, read the full CNN.com story.

[Updated at 4:14 p.m.] Kyrgyzstan's former foreign minister said Wednesday she is in charge of an interim government following protests that have driven President Kurmanbek Bakiyev from office.

"I hope we have control of the whole situation, but at the same time I must tell you that there is a lot of work," Roza Otunbayeva, who called herself the country's interim leader, told CNN. No independent confirmation of the claim was immediately available.

Are you there? Send photos, videos to iReport

Jim Carrey tweets a smile as he splits with Jenny McCarthy

Jim Carrey gave no hint of what led to his breakup with Jenny McCarthy in his short announcement via Twitter on Tuesday, but he punctuated it with his trademark smiling emoticon.

"Jenny and I have just ended our 5yr relationship. I'm grateful 4 the many blessings we've shared and I wish her the very best! S'okay! ?;