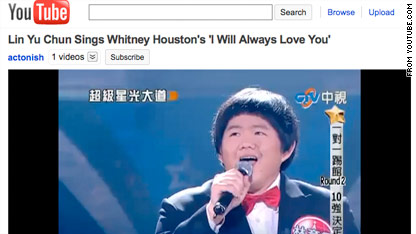 Lin Yu Chun sings "I Will Always Love You."

Lin Yu Chun - Even if you've never heard his name before, you may be about to get familiar with Lin Yu Chun. Think Susan Boyle name recognition giving Whitney Houston a run for her money - vocally, of course. Competing on Taiwan's "Super Star Avenue" (similar to "X-Factor" and "American Idol"), he sang Houston's version of "I Will Always Love You" and blew away the competition and lit up the Internet all at the same time.

(You can view his performance on YouTube here - but don't say you weren't warned.) Lin Yu Chun may have just thrown down the gauntlet on Whitney's version. A challenge for you, blog readers: Click on the YouTube link and close your eyes and tell me - have you forgotten you're listening to a reality show and started to think you're hearing "The Bodyguard"? Because the young man belted high notes you'd have heard from Whitney herself during the Grammys in 1993. While it's unclear how many people have seen his performance, because there are several versions of the video being passed around, Lin Yu Chun is working his way up Google trends and likely onto thousands of computers at work today.

Kate Middleton - There may be a royal wedding shortly if the blog The Daily Beast has got it right. British newspapers are filled with speculation about whether Prince William may soon propose to his girlfriend, Kate Middleton, after the blog reported on a possible wedding date. William and Middleton have been dating off and on since 2003, when both were students at the University of St. Andrews in Scotland. They both have been the topic of tabloid stories throughout the years and a wedding,  judging by Twitter and blog comments online, would attract even more attention.

Kyrgyzstan - Civil unrest engulfed the politically troubled central Asian nation of Kyrgyzstan on Wednesday, with the government declaring a state of emergency and street fighting resulting in dozens of deaths and injuries, the Interfax news agency reported. As with many other worldwide protests and violence, the Web and Twitter are flooded with reports from the area as well as people trying to find out the latest on-the-ground reports.