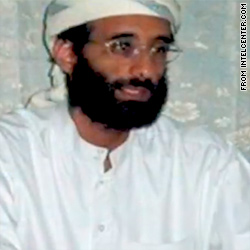 The U.S.-born Muslim cleric, who may be in Yemen, has been added to the CIA’s target list - meaning agents are authorized to kill or capture him - after U.S. intelligence officials concluded that he has taken an operational role in terrorist attacks.

The Los Angeles Times reports that the 38-year-old cleric, who was born in New Mexico, is believed to be the first U.S. citizen added to the list since 2001.

U.S. security sources said in January they had concrete and independent confirmation that al-Awlaki had met with Umar Farouk AbdulMutallab, the Nigerian accused in the failed Christmas Day bomb plot aboard a plane heading to Detroit, Michigan. And al-Awlaki has confirmed his contact with U.S. Army Maj. Nidal Hasan, the man accused of shooting and killing 13 people in November at Fort Hood, Texas.

The leader of the AFL-CIO is scheduled to speak at a forum Wednesday night at Harvard University to discuss “Why Working People are Angry and Why Politicians Should Listen.”

Trumka was elected president of the nation’s largest labor federation in September 2009. The AFL-CIO is a federation of 56 unions, representing 11.5 million members.

According to his official biography, Trumka, then 12, was sitting on his grandfather’s porch in Pennsylvania in the 1960s, complaining how badly striking mine workers were being treated. “What do you plan to do about it?” his grandfather asked. “When I grow up, I could be a politician,” Rich replied, remembering that his grandfather feigned smacking him across the back of his head.

Trumka writes that he offered another idea: “I could become a lawyer and stand up for workers’ rights.”

Following in the footsteps of his grandfather and father, Trumka spent seven years in the mines, and eventually got a law degree from Villanova University.

“The mines humble man,” he says. “I’ve been in near death, disastrous situations.”

The University of Connecticut Huskies beat Stanford 53-47 Tuesday night, winning their seventh NCAA women's basketball title. Moore, the player of the year, had 23 points and 11 rebounds.

"You can't really have any fear or any doubts," Moore said. "You just have to come out and be in attack mode. I'm absolutely always trying to be on the attack."

UConn hasn’t lost a game in two years - 78 straight wins - and Sports Illustrated columnist Ann Killion writes, “The best player in the country is Maya Moore. And Tuesday she did what the great ones do.”

Virginia’s Republican governor has declared April as Confederate History Month in his state. The Washington Post reports that the symbolic designation has angered civil rights leaders, but the move is likely to strengthen his position with conservative voters.

The Virginia Legislative Black Caucus and the NAACP have condemned the proclamation.  Next year will mark the 150th anniversary of the start of the Civil War, and McDonnell said Tuesday that the proclamation was designed to promote Virginia tourism, according to the Post.

The first woman to lead the Cherokee Nation died Tuesday morning at age 64 after a battle with pancreatic cancer, Cherokee leaders announced. Her successor, Chad Smith, called Mankiller "the iconic leader of the tribe."

Mankiller served 10 years as principal chief of the Cherokee, the second-largest Native American tribe in the U.S., and became its first freely elected leader in 1987. President Clinton awarded her the Medal of Freedom, the highest U.S. civilian honor, in 1998.

She was born in Oklahoma, where most of the Cherokee had been exiled by the U.S. government in the 1830s, but moved to California with her family in the 1950s. She returned to Oklahoma in 1977 to work for the tribe's community development agency and is credited with improving health care, education and tribal governance during her administration.