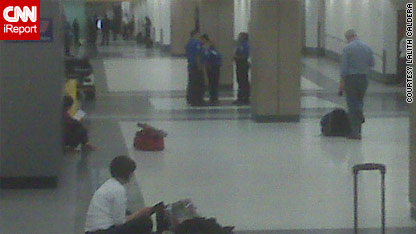 iReporter Lalith Caldera sent this photo from the United terminal where everyone was asked to stay where they were.

[Updated at 11:00 a.m.] Two terminals at Los Angeles International airport were reopened by 6:45 a.m. (9:45 a.m. ET) after airport police located the owner of a bag that had passed through security, airport spokeswoman Nancy Castles said.

The TSA said the passenger's bag was "flagged" for secondary screening, but the passenger picked up the bag and took it out of the security area. TSA
and law enforcement officials canvassed the terminal to locate the passenger, TSA spokeswoman Ann Davis said.

Once the passenger was found, he was interviewed by authorities.Ā  He was rescreened - along with his bag - and was allowed to continue to his flight.

[Updated at 10:23 a.m.] The Los Angeles International Airport warned of further flight delays and asked passengers to check their flight status before heading to the airport after a bag incident shut down two terminals Thursday.

CNN photojournalist Styke Dimas boarded a United flight to Denver at 5:30 a.m. but still hadn't taken off more than an hour later. Passengers were told they're not allowed to leave the plane and part of the flight crew is stuckĀ outside the terminal because of the security situation, Dimas said.

iReporter Lalith Caldera, who sent photos from the terminal and said he and others been forced by security to stop where he was walking, said he was now able to board his flight.

[Updated at 9:43 a.m] iReporter Lalith Caldera, who was supposed to be flying from Los Angeles to Buffalo, said he had just cleared security at the United terminal when authorities told everyone to stop where they were walking.

Caldera says he's been waiting about an hour and it doesn't look like any flights are taking off.

"It's just frozen in time," he said of the airport.

[Posted at 9:16 a.m.] Two terminals at Los Angeles International Airport were shut down Thursday because of a passenger's bag, the Transportation Security Administration said.

The shutdown, which happened around 5:10 a.m. (8:10 a.m. ET), caused flights to be delayed and hundreds of passengers to be backed up at security, CNN Senior Producer Michael Cary reported from one of the affected terminals.

The TSA said a passenger's bag was "flagged" for secondary screening, but the passenger picked up the bag and made it past the security area. TSA and law enforcement officials were canvassing the terminal to locate the passenger, TSA spokeswoman Ann Davis said.

The shutdown affects terminal 6 - which serves Aeromexico, Continental, Copa Airlines, United, and Virgin America - and Terminal 7, which serves only United. It was not clear at which terminal the incident happened.

The airport has nine terminals.

On the morning of April 17, two brothers in Westchester, New York, woke up to learn that they had become millionairātwitter.com/i/web/status/1ā¦es
cnni

7:20 pm ET May 14, 2021 RETWEET
The US CDC has said that people fully vaccinated against Covid-19 do not need to wear masks or practice physical diātwitter.com/i/web/status/1ā¦Ew
cnni

7:01 pm ET May 14, 2021 RETWEET
In the fight against the coronavirus, some places are faring better than others. Hereās how various countries arotwitter.com/i/web/status/1ā¦hFgG
cnni

6:45 pm ET May 14, 2021 RETWEET
Over the last week, the skies of Gaza have lit up with the fire of bombed-out buildings, and children have tried toātwitter.com/i/web/status/1ā¦YT
cnni