On the Radar: Mine search, Sarah Palin, Yemen child death 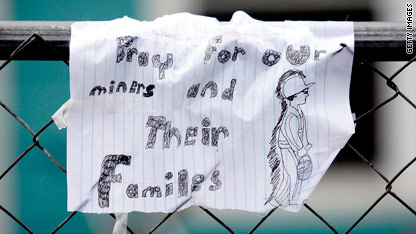 A handmade sign in support of missing miners hangs on a fence in Dorothy, West Virginia.

West Virginia mine disaster - Rescue crews searching for four missing miners were evacuated Friday from a West Virginia coal mine after encountering smoke, a signal of an active fire somewhere in the mine. Before retreating, the rescuers found one of two airtight safety chambers where  miners might have taken shelter but it had not been deployed. CNN is looking at safety issues and what is being done to keep miners out of harm's way as well as the resiliency of coal mining towns and how they respond to these tragedies.

Palin and the mainstream GOP - While revered by the Tea Party and hard-core conservatives, former Alaska Gov. Sarah Palin isn’t held in such high esteem by the GOP mainstream - 43 percent of all Republicans have a favorable view of her, according to a CBS News poll this week. As she prepares to address 4,000 Republicans of all stripes at the Southern Republican Leadership Conference in New Orleans, Louisiana, we look at where she stands and the decision she’ll have to make soon: pursue the GOP presidential nomination in 2012 or embrace a potentially lucrative media career. CNN's Paul Steinhauser reports.

END_OF_DOCUMENT_TOKEN_TO_BE_REPLACED

Massey Energy is paying for the funerals of the miners killed in the Upper Big Branch South Mine explosion, the company confirmed to CNN Friday.

The explosion at the company's coal mine this week killed 25 workers and left four unaccounted for. 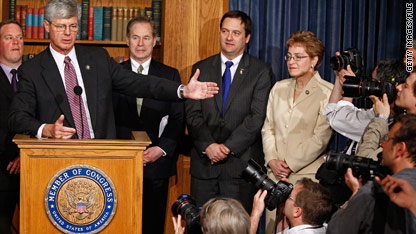 Bart Stupak came under fire for his support of the Obama administration's health care proposal.

[Updated at 9:52 a.m.] Tea Party Express spokesman Levi Russell said the group has been the only one bringing "major national attention" to Congressman Bart Stupak and believes his apparent decision to retire reflects his movement's clout.

Russell said Stupak had been "well-aware" that the Express has been "barnstorming" the state's Upper Peninsula to raise "awareness" of what he called the congressman's "duplicitous conduct."

END_OF_DOCUMENT_TOKEN_TO_BE_REPLACED

Virginia's proclamation of Confederate History Month without any reference to slavery was unacceptable, President Obama said in an interview broadcast Friday.

END_OF_DOCUMENT_TOKEN_TO_BE_REPLACED 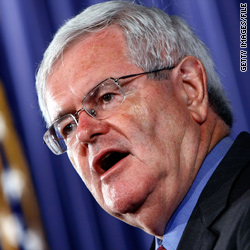 The former House speaker told those attending the Southern Republican Leadership Conference on Thursday night in New Orleans, Louisiana, that President Obama is radical, left-wing and socialist, among other adjectives.

Although he has not declared his attention to run in 2012, Gingrich, whose entrance to the GOP meeting was accompanied by the song "Eye of the Tiger," went on the attack soon after a standing ovation.

"The most radical president in American history has now thrown down the gauntlet to the American people: 'I run a machine. I own Washington, and there's nothing you can do about it,' " Gingrich said.

And during a question and answer session afterward, he said, "What we need is a president, not an athlete. Shooting three-point shots may be clever, but it doesn't put anybody to work."

END_OF_DOCUMENT_TOKEN_TO_BE_REPLACED

Rescue teams pulled from mine again

Rescue crews were evacuated again Friday from a West Virginia coal mine, stopping their search for missing miners.

END_OF_DOCUMENT_TOKEN_TO_BE_REPLACED

Diplomat in airliner scare to be sent home

The Qatari diplomat involved in a security scare aboard a Colorado-bound flight will be sent home, two State Department officials told CNN.

END_OF_DOCUMENT_TOKEN_TO_BE_REPLACED

A federal judge ordered a mental evaluation Thursday for a man charged with planting more than 30 "destructive" devices in mailboxes and other locations across east Texas.