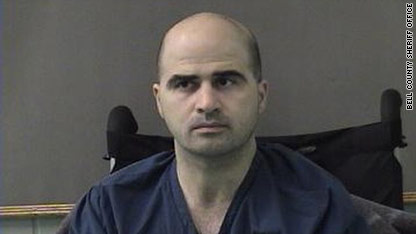 An Army major charged with shooting 13 people to death at Fort Hood, Texas, in November has been moved to a jail in Bell County, Texas, a deputy said Friday.

Maj. Nidal Hasan was severely wounded by police in the shootings and had been hospitalized at the Brooke Army Medical Center in San Antonio. Hasan's lawyer said his client was paralyzed from the waist down and will likely never walk again.

Jail records show that Hasan was booked into the jail early Friday. Fort Hood is in Bell County.

Hasan, 39, has been charged with 13 counts of premeditated murder, 32 counts of attempted murder and will face trial in the military's legal system.

The November 5 shooting spree killed 12 soldiers and one civilian. More than 30 others were wounded.

Hasan, a licensed Army psychiatrist, was scheduled to deploy to Afghanistan as part of a behavioral health support team a few weeks after the shootings took place.

Military records show Hasan received his appointment to the Army as a first lieutenant in June 1997 after graduating from Virginia Tech in Blacksburg, Virginia, with a degree in biochemistry. Six years later, he graduated from the Uniformed Services University of the Health Sciences' F. Edward Hebert School Of Medicine in Bethesda, Maryland, and was an intern, resident and fellow at Walter Reed Army Medical Center.

Hasan had been telling his family since 2001 that he wanted to get out of the military but was unsuccessful, said a spokeswoman for his cousin, Nader Hasan. She added that he told his family he was taunted after the terrorist attacks of September 11, 2001.

A Muslim born to Palestinian-American parents, Hasan had earlier expressed views that were brought to the attention of his Army superiors and the FBI. He also had exchanged e-mails with radical cleric Anwar al-Awlaki, an al-Qaeda recruiter and supporter based in Yemen.

Officials have determined that the Fort Hood shooting suspect acted alone and was not part of an organized attack. A criminal profiler also told CNN that Hasan fits the profile of a mass murderer better than that of a terrorist.