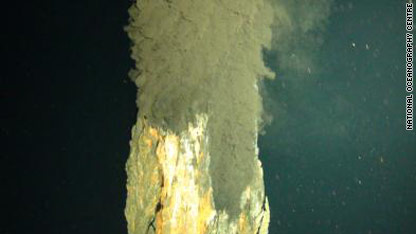 Smokey water billows out of metal ore at a volcanic vent located in the Cayman Trough.

A group of scientists exploring the Cayman Trough in the Caribbean said they have found the deepest known undersea volcanic vent. The waters near the vent are so hot they could yield clues to how life started on Earth and could contain never-seen-before marine life, scientists say.

"A tremendous roar went up in the main lab as a beautiful cluster of black smokers came into camera view," the crew of the RRS James Cook wrote in their online diary of the exploration found 3.1 miles undersea. "It was an amazing feeling to know that in a world with more than six billion people, we were seeing part of our planet that no-one had ever seen before."

The "Black Smokers," known as superheated volcanic vents often lead to "lush colonies of deep-sea creatures"¬Ý because of the scalding water and drastically different climate, according to the National Oceanographic Centre. Volcanic vents are cracks in the earth's crust that allow magma, gas, smoke and other material to escape the surface. Temperatures in these areas can reach 750 degrees Fahrenheit and heat the sea water to extreme temperatures before spewing it back into the ocean where it creates what appear to be smoke eruptions.

"The pressure three miles deep at the bottom of the Trough - 500 times normal atmospheric pressure - is equivalent to the weight of a large family car pushing down on every square inch of the creatures that live there," the NOC said.

The discovery of similar vents "has forced scientists to rewrite the rules of biology" in the past, the NOC said, and with the these superheated vents found at even larger depths, there could likely be more discoveries to come - especially since the Cayman Trough is the world's deepest undersea volcanic rift.

The crew of the RRS James hopes to explore further to identify any new sea creatures because those that can survive in extreme, unlikely places, could give clues to the beginning of life. They could also provide insight into whether other organisms, marine life, or other creatures may exist in similar climates - both on the Earth and other planets.

Scientists are fascinated by deep-sea vents because the scalding water that gushes from them nourishes lush colonies of deep-sea creatures, which has forced scientists to rewrite the rules of biology.

"We hope our discovery will yield new insights into biogeochemically important elements in one of the most extreme naturally occurring environments on our planet," says geochemist Doug Connelly of the NOC, who is the Principal Scientist of the expedition.

The discovery echoes the sentiment of NASA scientists, who weeks ago, found a shrimp-like creature 600 feet below Arctic Ice. Scientists said they had hoped the discovery of the create in extremely cold conditions could hold keys to life on some of the frozen moons in outer space.

The same hope now follows this discovery - which if nothing else was a magical moment for the scientists and crew.

"It was like wandering across the surface of another world," Geologist Bramley Murton of the National Oceanographic Centre, who piloted the HyBIS underwater vehicle, said. "The rainbow hues of the mineral spires and the fluorescent blues of the microbial mats covering them were like nothing I had ever seen before."

For a full story exploring what the discovery means check CNN.com on Tuesday.

Uber wants to make booking a ride in India as easy as sending a WhatsApp message. cnn.it/3Dpp1LM
cnni

3:01 am ET December 5, 2021 RETWEET
‚ÄúI promise you it‚Äôll go away if you just keep at it, OK?‚Äù US President Biden offered some words of encouragemetwitter.com/i/web/status/1‚Ä¶BZeEn6Cb
cnni

2:01 am ET December 5, 2021 RETWEET
Shelby Hoefling surprised her 96-year-old grandma, Patricia, with a trip to New York City and tickets to see the Ro‚Ätwitter.com/i/web/status/1‚Ä¶vo
cnni

1:01 am ET December 5, 2021 RETWEET
The world's first living robots, known as xenobots, can now reproduce ‚Äî and in a way not seen in plants and animalstwitter.com/i/web/status/1‚Ä¶5u4w
cnni

12:01 am ET December 5, 2021 RETWEET
"So glad to be back home." Woody, a creepy yet charming talking Christmas tree with a face, has returned to a Nova‚Ätwitter.com/i/web/status/1‚Ä¶0K
cnni