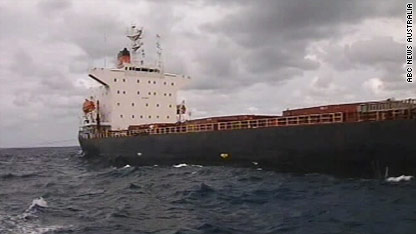 The Shen Neng 1 ran across a coral reef causing toxic paint to scrape off, which has killed parts of the coral almost immediately.

The Chinese coal ship that ran on to Australia’s Great Barrier Reef last week has damaged a two-mile (three kilometer) stretch of the World Heritage Area that could take years to repair, the chairman of the Great Barrier Reef Marine Park Authority said Tuesday.

Chairman Russell Reichelt told CNN affiliate ABC News in Australia that toxic anti-fouling paint had been scraped off the Shen Neng 1 as it ran across the coral reef. The paint contains biocides that prevent barnacles and other marine organisms from attaching to the hulls of ships.

"The paint that's been scraped off onto the reef is killing corals in its vicinity or they're showing signs of almost immediate mortality from being close to the anti-fouling," Reichelt told ABC News.

Reichelt said repairing the damage left by the Shen Neng 1 will likely be largest operation ever undertaken on the reef, a World Heritage Area.

Australian authorities have said the coal carrier was more than 17 miles off course when it ran aground on Douglas Shoal on April 4. The ship was refloated Tuesday and towed to a safe anchorage off the reef.

The ship leaked some oil when it hit the reef, but authorities said dispersants used had kept damage from any oil slick to a minimum.