On the Radar: Nadia Bloom, mine safety, Russia adoptions 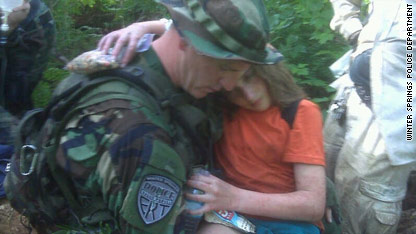 Nadia Bloom is carried out of a swampy area in Florida after being missing for four days.

Here’s a look at some of the stories CNN.com reporters are working on Wednesday:

Missing girl found alive - When Nadia Bloom was missing for four days after heading into the woods in central Florida, her family prayed she would be found alive. On Tuesday, those prayers were answered when a one-time member of the girl's church found her alive in a swampy area. CNN talks to the man who discovered Nadia and finds out how he stumbled upon her before rescuers did.

Mine safety - The CEOs of two of the largest U.S. coal-mining companies plan to testify about a range of issues in a hearing on Capitol Hill on Wednesday morning. One topic likely to come up: mine safety, particularly after last week's coal mine explosion that killed 29 miners in West Virginia.

To Russia, for love - For the nearly 3,000 American families in the process of adopting children from Russia, the actions of a Tennessee adoptive mother last week have them scared. Stephen Jack and his wife, Christine, said they worry the woman's decision to send a 7-year-old child back to Russia on a plane will hurt them all. “What this woman did to us is put us on pins and needles,” Stephen Jack said.

On Saturday, the Jacks will leave their North Carolina home to fly to Russia to adopt a boy named Valera who was 2 when he was found abandoned in the snow, both of his arms gone. The boy, now 14, has been living in a Russian orphanage. CNN.com's Jessica Ravitz reports on the family's story.

CNN also looks at research that has shown children who are adopted may be at elevated risk for mental health disorders. Most adopted children are psychologically healthy, but some can exhibit disruptive behavior. CNN's Madison Park reports.

Ship run aground - The captain and chief officer of a Chinese-registered ship that ran aground on the Great Barrier Reef will appear in an Australian court Thursday, charged with damaging the reef.

Going off the grid - It only takes the touch of a finger to locate the nearest bank, purchase tickets for an upcoming movie or find directions to just about anywhere in the world. The digital revolution has changed the way the current generation carries out everyday, mundane tasks. But some say that convenience has come at a price: privacy. CNN's Patrick Oppmann talks with experts about the pros and cons of reliance on technology and whether it’s possible to go completely “off the grid.”