Three-year-old shredding his way to be next Shaun White? 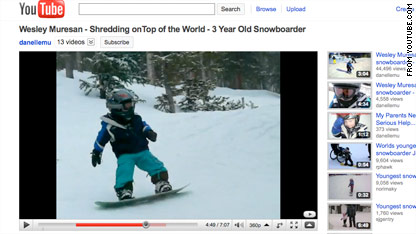 Wesley Muresan, a 3-year-old snowboard, is finding lots of fans on the Web

He shreds the snow, slides on the rails and grabs his board as he goes for big air like a pro.

Well, big, maybe isn't the right word - but it's big for him - considering he stands 3 feet tall and weighs 34 pounds.

Three-year-old Wesley Muresan wants to be the next Shaun White and he's grabbing a whole lot of attention and lots of internet traffic because of his skills.

He may be small - but his tricks aren't. When his instructors first met him, the bunny hill wasn't even an option. It was half pipe for Muresan from the get-go - which according to his videos was only at the end of 2009.

"I wanna snowboard with Shaun White in his secret half pipe and do tricks," Muresan said in a YouTube video. "Half-pipe is my specialty. I like it. I go really fast like Superman."

The pint-sized power rider would love nothing more than to hit the secret pipe White created to practice his own tricks - and even if that's awhile away for now - he's starting to get a fan base unlike any 3-year-old.

He already got a slew of supporters on his Facebook fan page - all amazed at the power packed into this tiny firecracker of an athlete. And according to his fan page, he's also picking up some good statistics - in a rail jam competition for 9-year-old kids he nabbed second place by doing a 180 turn.

And now, the Web is lighting up about him. He's featured on the U.S. snowboard team site, has a YouTube video with more than 40,000 hits, and he's just getting going.

And he's even got a slight edge on the Flying Tomato - three years to be exact. Though White grew up hitting the snow early, he switched to snowboarding from skiing at age 6.

And if this kid can keep it going, perhaps he'll get his own secret half pipe of his own built for him in the future.