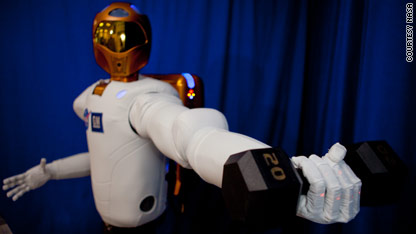 NASA hopes R2, or Robonaut 2, will one day work alongside humans in space.

In a not too distant future, on a space station not too far away, there will be a 300-pound human-like robot to assist astronauts on space missions.

And it will be a GM.

At least that's the plan for Robonaut 2, or R2, a space station robot developed by NASA and General Motors Corp.

R2 is set to make its debut in September on space shuttle Discovery. While not quite as handy as C-3PO or R2D2 from the "Star Wars" franchise, NASA officials have equipped Robonaut 2 with human-like hands and arms to hold the same tools that station crew members use.

"This project exemplifies the promise that a future generation of robots can have both in space and on Earth, not as replacements for humans but as companions that can carry out key supporting roles," said John Olson, director of NASA's Exploration Systems Integration Office.

The R2 has yet to be tested in microgravity and electromagnetic environments, but, GM officials say they are heavily testing the Robonaut before it goes into space.

While R2 undergoes extreme testing, GM officials hope the technology can be used in auto plants that use robotics.

Collaboration on R2 "will help us validate manufacturing technologies that will improve the health and safety of our GM team members at our manufacturing plants throughout the world," said Alan Taub, vice president of GM's global research and development.