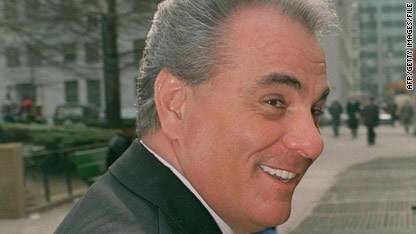 Federal officials say there was a scheme to infiltrate the hotel where jurors stayed during the trial of mob boss John Gotti, pictured, but it was called off.

Fourteen people that authorities identified as members of the Gambino crime family were arrested following a series of raids on charges ranging from murder to child sex trafficking and jury tampering, federal authorities announced Tuesday.

The jury tampering charge stems from a scheme to infiltrate the hotel where sequestered jurors stayed during late mob boss John Gotti's 1992 murder and racketeering trial, according to the US Attorney for the Southern District of New York. The plot was called off, federal authorities said, when Gotti became convinced - correctly so - that the jury would rule in his favor.

In the indictment, members of the crime family are charged with four murders.

Among those arrested was reputed current boss Daniel Marino. The Gambino family is one of organized crime's five leading families.

34% of Covid-19 survivors received a diagnosis for a neurological or psychological condition within six months of tŌĆtwitter.com/i/web/status/1ŌĆ”Ut
cnni

8:32 am ET April 11, 2021 RETWEET
For any human working or watching the #DerekChauvinTrial itŌĆÖs emotionally draining especially if youŌĆÖve been folltwitter.com/i/web/status/1ŌĆ”rKl2e8
sarasidnerCNN