Bail was set at $2 million on Wednesday for alleged Gambino crime family member Onofrio Modica, who is charged with, among other things,┬Āracketeering in connection with the deaths of two people.

Modica was among 14 alleged Gambino crime family members charged in New York on Tuesday with counts including┬Ā murder, racketeering, prostitution of minors and trying to locate and intimidate a sequestered jury.

END_OF_DOCUMENT_TOKEN_TO_BE_REPLACED

School rejects girlŌĆÖs prom date: A North Carolina teen was told she couldn't bring her brother to the prom because he was too old. WBTV reports.

Get ready for some big Facebook changes: Facebook, the world's largest social network, is set Wednesday to unveil changes at its f8 developers conference that have already caused a stir.

GM pays off its bailout loans: General Motors has made a final payment of $5.8 billion to the U.S. and Canadian governments, paying off the last of its $6.7 billion in loans, the company said.

No job for years and still looking: John Miller wasn't too nervous when he lost his job in the mortgage industry in June 2008.

Diapering with feet: Sarah Kovac has a disability that impedes the use of her arms and hands. That's why she uses her feet to change diapers.

END_OF_DOCUMENT_TOKEN_TO_BE_REPLACED

Battle to clear backlog as Europe reopens for flights

Airports across Europe began reopening Wednesday, six days after ash from an Icelandic volcano forced the shutdown of airspace and stranded thousands of passengers around the world.

The airspace over most of the United Kingdom, Denmark, Norway, Belgium, Ireland, Sweden and Germany was open again, air traffic authorities said.

Three men were sentenced to prison for forcing an African-American man out of a South Carolina convenience store, threatening him with a chainsaw and stealing his car, an incident the Department of Justice said was fueled by hate.

END_OF_DOCUMENT_TOKEN_TO_BE_REPLACED

Rovos Rail train manager Joe Mathala told CNN the accident occurred when the train - which runs weekly from Cape Town to Pretoria - stopped to change engines from electric to steam for the rest of its journey.

END_OF_DOCUMENT_TOKEN_TO_BE_REPLACED

A series of alerts in India has counter-terrorism experts working overtime; the latest coming in the form of a Warden Message from the U.S. Embassy late Wednesday.

ŌĆ£There are increased indications that terrorists are planning attacks in New Delhi,ŌĆØ the note read starkly, while strongly encouraging Americans in India ŌĆ£to maintain a high level of vigilance, remain aware of their surroundings, monitor local news reports, and take appropriate steps to bolster their personal security.ŌĆØ It also added that several markets in the city popular with western tourists could be attractive terrorist targets.

END_OF_DOCUMENT_TOKEN_TO_BE_REPLACED

Monica Beresford-Redman's mother met with a prosecutor in Cancun, Mexico, for several hours Tuesday night concerning her daughter's death at a resort two weeks ago.

Beresford-Redman was detained as a suspect soon after his wife's body was found in a sewer near their Cancun hotel room, but he was released a day later while police gathered more evidence. The initial investigation suggested Monica Beresford-Redman "died of strangulation, because of the bruising," regional police spokesman Adrian Cardena said.

Ely Burgos flew to Cancun Tuesday on a mission to retrieve her daughter's body and to provide information to investigators. Burgos gave them copies of e-mails exchanged between Bruce and Monica Beresford-Redman in the weeks before their Cancun trip - a trip that was an effort to save their troubled marriage, relatives said.

Autopsy shows no drugs in Osmond son before suicide

Marie Osmond's 18-year-old son did not have drugs in his system when he jumped from a Los Angeles apartment balcony to his death in February, his autopsy revealed.

Michael Bryan's death was ruled a suicide in the autopsy report released Wednesday by the Los Angeles County Coroner.

Bryan suffered "multiple blunt trauma" when he "jumped from height" on February 28, the coroner wrote.

"The toxicology report was completely negative," the autopsy report said.

Actress Heather Locklear allegedly crashed her car into a street sign near her home last weekend and failed to report the early morning wreck, police said.

Locklear, 48, was ticketed for a misdemeanor hit-and-run offense, but her lawyer said it was not clear she was behind the wheel. A neighbor called police Saturday night to report being awakened by the sound of a crash 16 hours earlier in the golf club community near Thousand Oaks, California, a Ventura County Sheriff's captain said.

The State Department is warning Americans about the possibility of new terror attacks in India.

The U.S. Embassy in New Delhi is listing well-known markets as possible targets and urging Americans to be on guard, especially for unattended packages.

END_OF_DOCUMENT_TOKEN_TO_BE_REPLACED

The SEC and the U.S. Attorney's office in New Jersey on Wednesday charged a Miami Beach-based businessman with allegedly running a Ponzi scheme that sucked in close to $1 billion.

END_OF_DOCUMENT_TOKEN_TO_BE_REPLACED

In an interview with "100 Huntley Street," a daily Christian talk show based in Ontario, the former Alaska governor said she "doesn't know politically what is next for me."

END_OF_DOCUMENT_TOKEN_TO_BE_REPLACED

Facebook on Wednesday unveiled a platform that will make it easier for users to share their interests with friends on other sites across the internet.

END_OF_DOCUMENT_TOKEN_TO_BE_REPLACED

An earthquake with a preliminary magnitude of 6.2 has struck near the Samoa Islands, the U.S. Geological Survey said Wednesday.

It was centered about 157 miles (253 km) west of Pago Pago, a city on American Samoa, the the U.S. Geological Survey said. 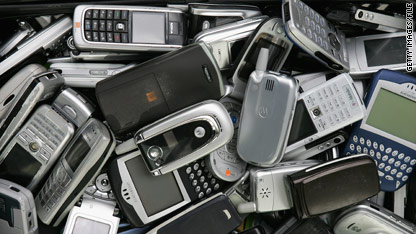 The Department of Homeland Security hopes new phones could sense chemicals in the air.

If you ever get caught up in a chemical or biological weapons attack, your cellphone may save your life. Or at least thatŌĆÖs the ambition of the Department of Homeland Security.

The DepartmentŌĆÖs science and technology team has begun talks with four cell-phone manufacturers on designing ŌĆśnextgenŌĆÖ phones that would be able to sense a wide variety of noxious chemical compounds in the air ŌĆō and alert the user. The director of the ŌĆ£Cell-AllŌĆØ program at the DHS, Stephen Dennis, tells CNN that within a year, ŌĆ£We expect up to 80 prototype cell phones to be developed that can be then tested against various agents.ŌĆØ

END_OF_DOCUMENT_TOKEN_TO_BE_REPLACED

A Senate committee on Wednesday passed a proposal aimed at helping protect the economy from future meltdowns and taxpayers from more Wall Street bailouts.

END_OF_DOCUMENT_TOKEN_TO_BE_REPLACED 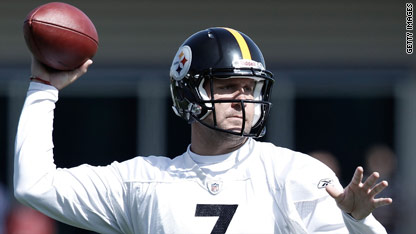 Ben Roethlisberger was suspended for "conduct detrimental to the NFL."

If he misses all six games it could cost Roethlisberger an estimated $2.8 million, according to The Associated Press.

END_OF_DOCUMENT_TOKEN_TO_BE_REPLACED

Foul play is not suspected in the death of Colorado Rockies President Keli McGregor, who was found dead Tuesday in a Salt Lake City, Utah, hotel room, police said Wednesday.

END_OF_DOCUMENT_TOKEN_TO_BE_REPLACED

Mercedes-Benz will take a step toward offering a self-driving car in the United States when it begins selling vehicŌĆtwitter.com/i/web/status/1ŌĆ”hz
cnni

Mercedes-Benz will take a step toward offering a self-driving car in the United States when it begins selling vehicŌĆtwitter.com/i/web/status/1ŌĆ”hz
cnni