Camera captures rhino that is near extinction 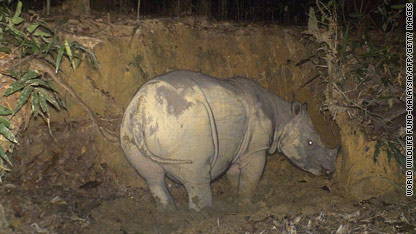 A Sumatran rhino, which is near extinction, was photographed in Borneo.

A remote camera in the Malaysian section of Borneo has photographed a Sumatran rhino, a species near extinction, the World Wildlife Fund-Malaysia announced on Wednesday.

The animal in the photo taken February 25 appears to be a pregnant female less than 20 years old, buoying hope for the species believed to have fewer than 30 animals left in the wild in Borneo, according to a WWF statement. Only 200 Sumatran rhinos total remain in isolated areas across Southeast Asia, according to the International Rhino Fund.

“It would be wonderful if this female is pregnant, since there are so few Sumatran rhinos left in the world that each calf represents a lifeline for the species,” rhino expert Terri Roth says in the WWF statement.

Sumatran rhinos are also called hairy rhinos, as their shaggy coats set them apart from other rhinos that appear hairless.

Laurentius Ambu, director of Sabah Wildlife Department, whose camera captured the image of the rhino, said the image shows conservation efforts in the region are paying off. Habitat conservation and a breeding program for the isolated rhino population are being implemented, Ambu said the WWF release.

“The future of rhinos in Borneo now depends on how seriously the enforcement and security work in the forest reserves can be implemented and coordinated,” said Raymond Alfred, head of the Borneo Species Program of WWF-Malaysia.