Mexican authorities on Thursday continued to investigate the kidnappings of at least six people from a Holiday Inn in Monterrey, Mexico, Wednesday.

END_OF_DOCUMENT_TOKEN_TO_BE_REPLACED

Wall Street to Obama: Hands off! Wall Street was unimpressed by President Obama's argument for financial reform on Thursday. The reaction of nearly a dozen financial industry workers ranged from skepticism to animosity.

Court fight over brain-damaged mom's triplets: Abbie Dorn always wanted children, and in June 2006 she got her wish - triplets. But during a difficult birth she suffered severe brain damage that took away her.

'South Park' religious mockery nothing new: Nothing is sacred on "South Park."

Bradford is the first pick of the NFL Draft

[Updated at 8:08 p.m.] And with the fifth pick, the Kansas City Chiefs selected safety Eric Berry from Tennessee.

Track the entire draft at CNNSI

[Updated at 8:00 p.m.] Trent Williams, an offensive tackle from Oklahoma, was selected by the Washington Redskins as the fourth pick.

[Updated at 7:55 p.m.] The Tampa Buccaneers selected Gerald McCoy, a defensive tackle from Oklahoma, with the third pick.

[Updated at 7:44 p.m.] With the second pick, the Detroit Lions selected Ndamukong Suh, a defensive tackle from Nebraska.

[Posted at 7:39 p.m.] The St. Louis Rams selected quarterback Sam Bradford of Oklahoma with the first pick of the NFL Draft Thursday night.

A man has been charged in a shooting that left four dead at a North Hollywood, California, restaurant on a Saturday night earlier this month, the Los Angeles County District Attorney's Office announced Thursday.

Nerses Arthur Galstyan, 26, was charged with four counts of first-degree murder with the special circumstance of multiple murders.

END_OF_DOCUMENT_TOKEN_TO_BE_REPLACED 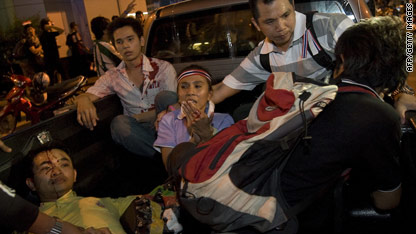 END_OF_DOCUMENT_TOKEN_TO_BE_REPLACED

[Updated at 1:43 p.m.] An oil rig that has been burning in the Gulf of Mexico has sunk, said Lt. Cmdr. Cheri Ben-Iesau of the U.S. Coast Guard.

[Posted at 10:50 a.m.] The U.S. Coast Guard resumed its aerial search Thursday morning for 11 people missing after a "catastrophic" explosion aboard an oil rig in the Gulf of Mexico, an agency spokeswoman said.

END_OF_DOCUMENT_TOKEN_TO_BE_REPLACED

Airlines hoping for exemptions at some airports to the tarmac delay rule going into effect next week are out of luck.

The Department of Transportation denied requests Thursday from JetBlue, Delta, Continental, American and US Airways for exceptions to the rule, which were prompted by runway construction at New York's John F. Kennedy International Airport, one of the nation's most congested airports.

END_OF_DOCUMENT_TOKEN_TO_BE_REPLACED

"A very close friend" of a woman killed at a Cancun, Mexico, resort sold e-mails purportedly exchanged between the dead woman, her husband and his alleged mistress to a gossip website, the website said.

The e-mails were published by Radaronline.com on Thursday, a day after Ely Burgos, Monica Beresford-Redman's mother, gave copies of e-mails to Mexican authorities investigating her death.

END_OF_DOCUMENT_TOKEN_TO_BE_REPLACED

Britain's Brown goes on the attack in TV debate

Gordon Brown played offense against the two men hoping to replace him as prime minister Thursday night as the leaders of Britain's three main parties clashed in a televised debate.

But two polls released minutes after the debate suggest the attacks did him little good.

A southwestern Ohio mother who went missing over the weekend while on a shopping trip has been found in Florida, police said Thursday.

Xenia police said Tiffany Tehan was found in Miami Beach. She is safe and has been in contact with her family, Capt. Scott Anger said.

END_OF_DOCUMENT_TOKEN_TO_BE_REPLACED

Stocks ended higher Thursday, erasing a steep morning selloff sparked by Greek debt default worries, a spike in the dollar versus the euro and a plunge in commodity prices.

Also in focus: President Obama's speech on financial reform, a better-than-expected housing market report, a mixed reading on weekly jobless claims, a rise in wholesale inflation and the latest round of corporate profit results.

END_OF_DOCUMENT_TOKEN_TO_BE_REPLACED 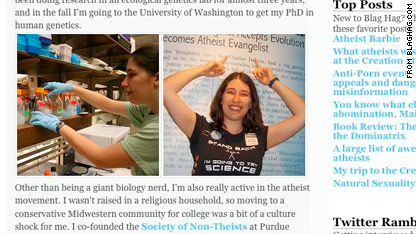 END_OF_DOCUMENT_TOKEN_TO_BE_REPLACED

A federal lawsuit is claiming the companies connected to an oil rig explosion in the Gulf of Mexico were negligent.

The suit was filed in Louisiana Wednesday on behalf of one of the 11 men missing after the Tuesday night blast.

Transocean, Ltd., which owns the rig, and BP, PLC, which operates the license on which the rig was drilling, are listed as defendants.

A spokesman for Transocean did not immediately return a call requesting comment.

Lawyers for Rod Blagojevich filed a motion Thursday seeking to subpoena President Barack Obama to testify in the corruption case against the former Illinois governor.

The 10-page motion contends Obama must have information in the case because the charges against Blagojevich involve alleged deal-making to fill the U.S. Senate seat vacated by Obama when he became president.

END_OF_DOCUMENT_TOKEN_TO_BE_REPLACED

An Illinois man is suing the Vatican and Pope Benedict XVI for allegedly covering up sexual abuse by a priest at a Catholic school in Wisconsin.

The lawsuit demands the Vatican release the names of thousands of Catholic priests that the suit says have "credible allegations of sexual misconduct" against them.

END_OF_DOCUMENT_TOKEN_TO_BE_REPLACED

[Updated at 12:03 p.m.] President Obama said Thursday the financial crisis that led to the U.S. recession was caused by a "failure of responsibility - from Wall Street to Washington."

[Posted at 11:58 a.m.] President Obama said Thursday that the nation's economic recovery will not be satisfactory until the progress felt so far on Wall Street reaches Main Street. 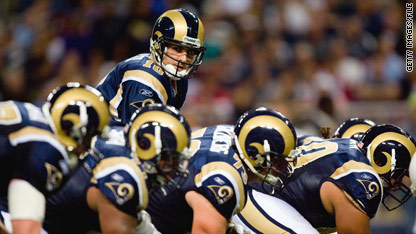 The St. Louis Rams are hoping the first pick in the draft will help them start reversing a league-worst record over the last three years.

It is the offseason Super Bowl, a (now) three-day event where franchises are rebuilt or destroyed. The NFL Draft begins today at 7:32 pm - the St. Louis Rams are on the clock - and to provide you with a quick primer on what to expect in Round One, SI.com’s Peter King offers his 2010 Mock Draft. The draft is the glamour event on a night (all times Eastern) that includes NHL and NBA playoff games.

-NFL Draft, Round One (7:30 pm, ESPN and NFL Network)
King says the person under the most pressure on draft weekend is St. Louis general manager Billy Devaney, who holds the top pick in the draft. “And not only because he's on the verge of bypassing two franchise defensive tackles at No. 1 when his team doesn't have even a borderline Pro Bowl DT on the roster now,” King says. “Devaney has to take (Oklahoma’s) Sam Bradford if he feels Bradford's a franchise quarterback, and this team does feel he has the kind of star quality on and off the field the Rams can build around. But the pressure will be on the Rams to turn around a franchise with a league-worst 6-42 record over the past three years. That begins by spinning gold out of the first pick of day two of the draft, the 33rd overall.”

END_OF_DOCUMENT_TOKEN_TO_BE_REPLACED 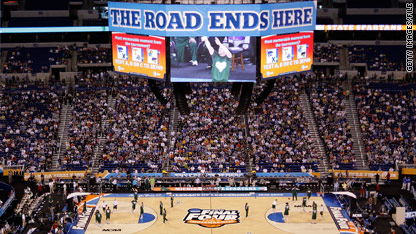 CBS Sports and Turner inked a 14-year agreement with the NCAA.

The NCAA announced a new 14-year online and TV deal with Turner Broadcasting and CBS.

Under the $10.8 billion deal all men's basketball games will be played across four national networks starting in 2011 and through 2024 - a first for the 73-year-old championship.

END_OF_DOCUMENT_TOKEN_TO_BE_REPLACED

Officials not yet discounting N. Korea in sinking

South Korean authorities continue to probe the mysterious sinking of a naval ship last month in the Yellow Sea, but authorities haven't discounted a theory that North Korea could have sunk the vessel.

Seoul has avoided blaming North Korea and North Korea sloughed off allegations it is responsible. Yonhap news agency reports that authorities have yet to find "concrete evidence, such as fragments of a torpedo" to back up evidence of North Korean involvement.

END_OF_DOCUMENT_TOKEN_TO_BE_REPLACED 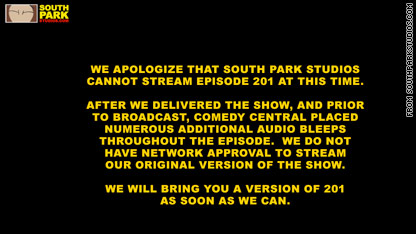 It took seven minutes of a "South Park" episode to change a devout Muslim’s features from an entertained smile to complete disapproval. He told his colleague, Lebanese blogger Bilal el-Houri, as he walked away from the screening, “This is disgusting.”

What the young man (he prefers to remain anonymous) found disgusting was the depiction of Islam’s revered Prophet Mohammed as a bear mascot in "South Park’s" 200th episode. The depiction was the show authors’ sarcastic attempt to highlight media’s uneasy dealing with the father of Islam as not to offend Muslims who consider any depiction of their prophet as blasphemous.

Since his followers insist on him not being shown in any form, producers have always struggled with ways to include Mohammed in story lines without showing him. The most famous of those depictions is the classic Hollywood movie ‘The Message’ by Mustafa al-Akkad about the life of Prophet Mohammed. Being Muslim himself, al-Akkad directed his entire film with extreme sensitivity building the character of the prophet around the wind or the light so it’s a presence that is felt or experienced but not seen.

The "South Park" episode showing Mohammed disguised in a bear suit earned the show creators Matt Stone and Trey Parker a jihadist campaign and a serious warning from a radical Islamic group based in New York City. The group posted on its website Revolutionmuslim.com a video filled with reminders of what fundamentalist Muslims did to those who in their eyes “insulted” their prophet.

On Wednesday night the episode continued the storyline of Mohammed in part II of the episode– but it aired with additional audio bleeps and image blocks reading “CENSORED." They also didn't have the episode streaming on their Web site. There was however, this message from the creators: