Sports Update: Bruins try to knock off Sabres in playoffs 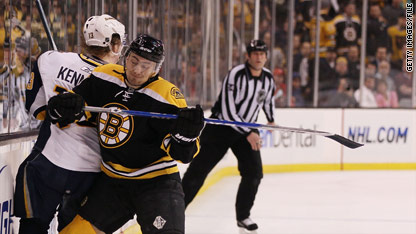 The Boston Bruins can knock the Buffalo Sabres out of the playoffs with a win Monday night.

With the NFL Draft in the rearview mirror – check out SI.com’s Peter King for an extensive recap column – the immediate focus of sports fans turns to the NBA and NHL playoffs. The Monday schedule for the NHL is particularly terrific. The highlights (all times Eastern):

Capitals at Canadians (7:00 p.m., Versus)
Montreal has lost its last six games at home but has stayed alive by beating top-seeded and Presidents’ Trophy-winning Washington on the road including a huge 2-1 win in Game 5. The Caps lead the series 3-2.

Sabres at Bruins (7:00 p.m., CBC)
The Bruins lead the series 3-2 and can eliminate the Sabres tonight. Boston has won its last four home games, including two in the playoffs.

Blackhawks at Predators (9:00 p.m., Versus)
In one of the cruelest playoff losses ever, Nashville blew a 4-3 lead while on the power play in the final seconds of regulation – Chicago scored with 13.6 seconds left – before Blackhawks star Marian Hossa scored 4:07 into overtime to take a 3-2 series lead.

16
age of Abby Sunderland, who announced this weekend on her blog that she will end her quest to become the youngest person to sail solo around the world. The California girl will head to South Africa for boat repairs.