More than 200,000 smoke alarms are recalled over concerns they can fail to alert people to fire. Seven Kidde modelsâ€twitter.com/i/web/status/1â€¦of

A judge says the immediate family of Andrew Brown Jr. can see the videos of his fatal encounter with law enforcement cnn.it/2RA86nm

Derek Chauvin and three other ex-officers are indicted by a federal grand jury in connection with the death of Georâ€twitter.com/i/web/status/1â€¦gG

The US economy added only 266,000 jobs in April, far less than forecasts had predicted. The unemployment rate roseâ€twitter.com/i/web/status/1â€¦YF

Pfizer/BioNTech seeks full FDA approval for its Covid-19 vaccine, which is currently available through an emergencyâ€twitter.com/i/web/status/1â€¦9W

END_OF_DOCUMENT_TOKEN_TO_BE_REPLACED

Raquel had just left her job for the day as a cashier at her brother-in-law's restaurant in Phoenix when I called to ask if she would talk to me about Arizona's new immigration law. Without hesitation, she returned to the Mexican fast-food joint, where the air conditioner is temporarily out of service, a toy-grab machine guards the bathrooms and the day's special - tortaÂ milanesa - is written on a neon pink poster board.Â

END_OF_DOCUMENT_TOKEN_TO_BE_REPLACED

A report released Tuesday by a human rights group details allegations of horrific torture and abuse at a secret prison in Iraq where detainees say they were routinely beaten, shocked and sodomized by their interrogators.

The report by Human Rights Watch was based on interviews conducted Monday with 42 prisoners who had been held at a secret facility in west Baghdad's old Muthanna airport since late 2009.

END_OF_DOCUMENT_TOKEN_TO_BE_REPLACED

Hundreds of people spilled into an Oakland, California, street after hearing gunshots at a funeral, sparking a citywide emergency response, police said.

END_OF_DOCUMENT_TOKEN_TO_BE_REPLACED

Coast Guard officials are considering setting the Gulf of Mexico oil slick on fire as it moved Tuesday to within 20 miles of sensitive ecological areas in the Mississippi River Delta.

Officials say it could become one of worst spills in U.S. history.

Oil is still leaking at a rate of about 42,000 gallons a day from the well, located some 50 miles off the coast of Louisiana beneath a drill rig that exploded and sank last week. Eleven workers are still missing following the incident, and are presumed dead.

BP, the well's owner, is racing to shut off the well using eight remote controlled submarines, but has had no luck as of yet.

Goldman execs: We didnâ€™t do anything wrong: Top Goldman Sachs representatives - including CEO Lloyd Blankfein - attempted to deflect criticism Tuesday as they faced a blistering cross-examination from lawmakers about the firm's role in the financial crisis.

Buffettâ€™s longest bet looking better: Unaudited results are in for the second year of "Buffett's Big Bet" - Warren Buffett's 2008 wager against ProtÃ©gÃ© Partners that a low-fee index fund will outperform certain funds of hedge funds - and the famous investor has gained some ground on his challenger. In the 2009 segment of the 10-year bet, an S&P 500 index fund - that's Buffett's pick - outdid the average performance of the five funds of funds that New York-based money management firm ProtÃ©gÃ© backs, 26.2 percent to 15.9 percent.

Snookiâ€™s bar fight caught on tape: "Jersey Shore's" Snooki gets in another bar fight. Was it the real thing or just a story line for the new season?

Â A top federal mine safety official said Tuesday that existing laws and regulations have not been properly enforced but pledged that his agency will now use all its powers after the West Virginia mine disaster that killed 29 people.

Joe Main, the assistant secretary of labor for mine safety and health, told a Senate committee that the Mine Safety and Health Administration will start using its power to immediately shut down mines engaging in unsafe behavior.

Main said the powers have existed for decades but were never used.

The official vote was 57-41 in favor of moving forward with Senate Majority Leader Harry Reid, D-Nev., switching his vote from "yes" to "no," in a procedural move that allows him, under the Senate rules, to bring the bill up again as early as Wednesday for another vote.

President Obama took his renewable energy push to the heartland Tuesday, trumpeting the merits of wind power during a visit to the state that launched him on the road to the White House a little over two years ago.

Obama's visit to the Siemens wind turbine blade manufacturing plant in Fort Madison, Iowa, was the latest stop in his "White House to Main Street" tour, part of his pitch to middle-class workers hurt by the economic downturn.

"Lately, we've been able to report some welcome news after a hard two years. Our economy is finally growing again," Obama told workers at the plant.

But "times are still tough for middle-class Americans, who had been swimming against the current for years before the economic tidal wave hit."

While in Iowa, the president also toured an organic farm in Mount Pleasant and was scheduled to host a town hall meeting at Indian Hills Community College in Ottumwa.

Goldman execs: We didn't do anything wrong

Top Goldman Sachs representatives - including CEO Lloyd Blankfein - attempted to deflect criticism Tuesday as they faced a blistering cross-examination from lawmakers about the firm's role in the financial crisis.

For more than eight hours, members of a Senate panel skewered current and former executives at Wall Street's top firm with pointed questions and criticisms in an effort to just how Goldman had positioned itself as the nation's housing market started to come unraveled in 2007.

One law requires women to undergo an ultrasound examination and listen to a description of what it shows before getting an abortion.

Senate President Pro Tempore Glenn Coffee, a Republican, said Tuesday's vote shows lawmakers listened to Oklahoma's citizens and "made a bold statement in support of the sanctity of life."

But Democratic Gov. Brad Henry has called the legislation "an unconstitutional attempt by the Oklahoma legislature to insert government into the private lives and decisions of its citizens."

Henry vetoed the bill and another abortion-related measure Friday, but the state House on Monday overwhelmingly voted to override both vetoes, with House Speaker Chris Benge, a Republican, lauding his colleagues for "moving quickly." The Senate's 36-12 vote Tuesday was the final step required to make the bills laws.

END_OF_DOCUMENT_TOKEN_TO_BE_REPLACED

The Dow Jones industrial average tumbled 213 points, or 1.9 percent, closing below 11,000, a key psychological level. The Dow ended the previous session at its highest point in 19 months.

END_OF_DOCUMENT_TOKEN_TO_BE_REPLACED

4 dead, 30 injured in attack in Kandahar

(Updated at 7:13 p.m.) At least four people were killed and 30 others were injured in the attack, according to Zalmai Ayoubi, the Kandahar governor's spokesman.

(Updated at 1:02 p.m.) At least 10 men were injured Tuesday when attackers targeted a private security company near the Kandahar Airfield, according to Zalmai Ayoubi, the Kandahar governor's spokesman.

END_OF_DOCUMENT_TOKEN_TO_BE_REPLACED 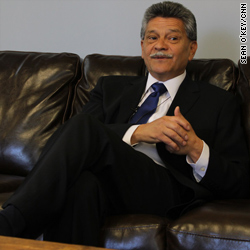 Tommy Espinoza, president of Raza Development Fund in Phoenix, Arizona, talks about his views on the new immigration law.

Arizona has had a few days to let the reality of the new immigration law, SB 1070, settle in, and many don't like what they see. Beyond fears of racial profiling and civil rights abuses in cities like Phoenix, where about a third of the population is Latino, local activist and businessman Tommy Espinoza says the fabric of his community is slowly unraveling.

Espinoza, president and CEO of RazaÂ Development Fund, has lived in Phoenix all his life. He witnessed the mass migration from south of the border that accompanied Phoenix's construction boom in the '80s and '90s, when attitudes toward immigrant labor were "different," he says. Two decades later, many of those workers have settled in the area, raised families andÂ become part of the community, contributing economic and social capital. Now, he says, the specter of SB 1070 is fostering anger and paranoia.

In fact, it's already happening, he says. Latinos, both documented and illegal, are staying indoors out of fear they'll get picked up, and others are fixing to leave the state altogether, he says.

In the meantime, tensions are rising.

END_OF_DOCUMENT_TOKEN_TO_BE_REPLACED

Medical tests show Bret Michaels has suffered a setback in his recovery from a brain hemorrhage, according to a statement posted on his official website Tuesday.

Despite the development, "doctors remain hopeful for a full recovery," the statement said.

The rock singer and reality TV star suffered a massive brain hemorrhage and was hospitalized Friday.

"Test results indicate a set back in Bret Michaels' condition, a side effect from the brain hemorrhage called hyponatremia, a lack of sodium in the body which leads to seizures," said the statement posted by road manager Janna Elias.

Michaels "is responding well to tests and treatments," she said.

"Even though today was a minor set back Doctors remain hopeful for a full recovery and plan to release more specific information next Monday," Elias wrote.

END_OF_DOCUMENT_TOKEN_TO_BE_REPLACED

Iranian Foreign Minister Manouchehr Mottaki met this weekend in Vienna, Austria, with IAEA Director General Yukiya Amano, but no headway was made on a plan for Iran to ship its low-enriched uranium to Russia and France to be converted into fuel for a medical research reactor.

Iran initially agreed to the offer when it was made in October, but later rejected it.

"So far as we are aware, based on the readout of the meeting between the Iranian foreign minister and the director general of the IAEA, there was nothing new that was presented," Clinton told reporters after a meeting with the president of the European parliament. "We still don't have anything other than just an ongoing effort to try to influence public opinion as opposed to sitting down and providing an answer on the outstanding offer on the [Tehran Research Reactor], which is many, many months old now."

"Iran's continued disregard for its international obligations underscores the importance of united international pressure to change its policies," Clinton added.

Iran was high on the agenda in talks between Clinton and Israeli Defense Minister Ehud Barak in Washington on Tuesday. Barak left the State Department for further talks on Iran with Defense Secretary Robert Gates.

END_OF_DOCUMENT_TOKEN_TO_BE_REPLACED

Security Brief: A rare glimpse of Islamic extremists in Africa

The arrest of 24 alleged al Qaeda activists in Morocco has cast a rare spotlight on Islamic extremism in north-west Africa, a phenomenon that is troubling both the regionâ€™s governments and western intelligence agencies.

Morocco says it detained the al Qaeda group in a sweep that focused on the sprawling port city of Casablanca. Others arrested are from the towns of Birrichid and Kenitra, according to Association Annassir - a group that represents Islamist detainees in Morocco. Four had previously served prison terms for militant activity, the Association said.

The Interior Ministry alleged in a statement on Monday that the group was â€œpreparing to carry out assassinations and acts of sabotage within the country, notably targeting the security services and foreign interests in Morocco."

Officials allege the group was also recruiting other Moroccans to fight in Iraq and Afghanistan. Itâ€™s not known whether any of those detained has been formally charged.

END_OF_DOCUMENT_TOKEN_TO_BE_REPLACED

Mexico's Foreign Ministry on Tuesday issued an advisory to Mexicans living and working in Arizona following the signing of a controversial law to stem illegal immigration in that state.

END_OF_DOCUMENT_TOKEN_TO_BE_REPLACED

Romanian authorities are investigating after one of Europe's largest brown bears was allegedly shot and killed by aâ€twitter.com/i/web/status/1â€¦Ob
cnni

12:31 pm ET May 7, 2021 RETWEET
China's annual emissions exceeded those of all developed nations combined in 2019, the first time this has happenedâ€twitter.com/i/web/status/1â€¦b0
cnni