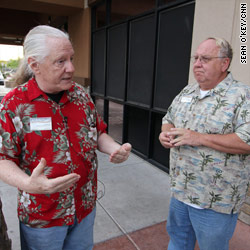 Lee Earle, a self-identified “Tea Party facilitator” in Arizona, ground zero of the immigration debate, wants you to know that he supports immigration. He considers it the lifeblood of American society and the backbone of our economy – if it’s done legally.

“We want immigration. We need immigration! All we want is for people to sign the guestbook at the door,” said Earle, a Phoenix resident. “Being an illegal immigrant in Arizona is like trespassing. If you’re in my house and you’re not invited, then I have every right to send you out.”

Earle says he supports Arizona’s controversial new law targeting illegal immigration because it lets local law enforcement do what the federal government should be doing to stop people from entering the country unlawfully.

“When people come here without permission, when they come here illegally, they automatically become victims of the coyotes who bring them over and the employers who take advantage of their cheap labor,” Earle said. “Let them come legally so they can take advantage of all the wonderful services and opportunities this great nation has to offer and they can contribute in a meaningful way.”

Earle, a loquacious retiree who gesticulates frequently as he fires off in a stream-of-consciousness manner, shared his thoughts Tuesday night before a legislative district meeting at the Jumbo Buffet in a strip mall in southwest Phoenix.

Dressed in a Hawaiian shirt and jeans, his long gray hair pulled back, Earle said he blames health care, education and incarceration for illegal immigrants for contributing to the state’s $2 billion budget deficit.

“It’s a monetary thing for the state, because I’m a taxpayer but also a human concerned because they can’t take advantage of our legal system because they’re afraid of being deported,” he said.

Earle’s friend and fellow Tea Partier Ronald Ludders dismissed with a wave of the hand the suggestion that the bill encourages racial profiling.

“Illegal is not a race," said Ludders, who, like Earle, is a Republican precinct committeeman for his legislative district. “Law enforcement will be looking for people who they have reasonable suspicion to believe are breaking the law. They cannot stop them based on the color of their skin.”

Both men say this is not about hating Hispanics: Ludders has a home in Mexico, and Earle lives in a predominantly Hispanic neighborhood.

“This is about fixing a problem that has been plaguing our communities for a long time. If the federal government isn’t going to do anything, I’m proud of Arizona for stepping up to the plate,” Earle said.