The House has passed Democrats' sweeping health care and climate bill, which now goes to President Biden to be signŌĆtwitter.com/i/web/status/1ŌĆ”QK

RT @CNN: The US District Court for the Southern District of Florida has unsealed the search warrant and property receipt from the FBI searcŌĆ”

One week after a fiery car crash, Anne Heche is "brain dead" but remains on life support, according to a statementŌĆtwitter.com/i/web/status/1ŌĆ”Mk

The FBI recovered 11 sets of classified documents from its search of Mar-a-Lago earlier this week, including some aŌĆtwitter.com/i/web/status/1ŌĆ”tO

Poliovirus has been detected in wastewater samples in New York City, suggesting likely local circulation of the virŌĆtwitter.com/i/web/status/1ŌĆ”GJ 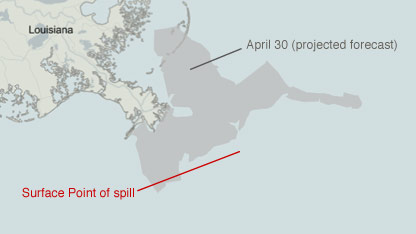 (Update 6:48 p.m.)┬ĀU.S. Secretary of Defense Robert Gates has approved Louisiana Gov. Bobby Jindal's request to mobilize 6,000 National Guard troops in response to the massive oil spill expanding in the Gulf of Mexico, according to a Defense Department spokesman.

(Update 5:25 p.m.)┬ĀThe federal government is heightening the pressure on BP, pushing the oil company to do more to stop well leaks gushing thousands of barrels of oil into the Gulf of Mexico and to beef up its response to the potential environmental impact on the coast.

- Biloxi Mayor A.J. Holloway discussed oil-spill preparations with key┬Ā department heads and will ask the City Council to declare a state of emergency.

- BP has set up a "Vessel of Opportunity" program for vessel owners to┬Ā offer their services to assist with response efforts.

(Update 2:12 p.m.)┬ĀA number of organizations are recruiting volunteers to help with the effects of the oil spill. HereŌĆÖs how you can help.

(Update 1:31 p.m.)┬Ā Attorney General Eric Holder is sending a team of Justice Department attorneys to the Gulf Coast to meet with federal prosecutors and response teams, the Justice Department said in a statement released Friday.

(Update 12:57 p.m.) Track the oil spill with this map┬Āand tell us how it is affecting you.

He said domestic oil production continues to be "an important part of our overall strategy" but said "it must be done responsibly for the safety of our workers and our environment."┬Ā

-┬ĀLouisiana's Gov. Bobby Jindal has declared a state of emergency and asked the Defense Department to approve funding for the deployment of 6,000 National Guard troops.

- Along the Gulf coast business owners are concerned about the potential impact on the bottom line. The oil slick coming ashore "would put us out of business," fisherman Rene Cross in Venice, Louisiana, told CNN affiliate WDSU.┬Ā

- Dave Rauschkolb who owns three restaurants on the Florida Panhandle says:┬Ā"We are a seasonal economy.┬Ā If I don't have my summer business, I am out of business." Full story

- Five staging areas are in place and ready to protect sensitive shorelines: Mississippi;┬ĀPensacola,┬ĀFlorida;┬ĀVenice,┬ĀLouisiana;┬ĀPascagoula,┬ĀMississippi;┬Āand┬ĀTheodore,┬ĀAlabama. A sixth staging area is being set up in Port Sulphur, Louisiana.

- Winds on Friday are from the southeast at 20 knots Seas are 5-┬Āto 7- feet,┬Āwith slight chance of afternoon showers.

Could the Ecovado could be a greener alternative to 'green gold'? cnn.it/3SPQiji
cnni

ŌĆ£Church leaders disclosed that multiple Southern Baptist entities were under investigation and said that all wouldtwitter.com/i/web/status/1ŌĆ”n7Ow
susancandiotti