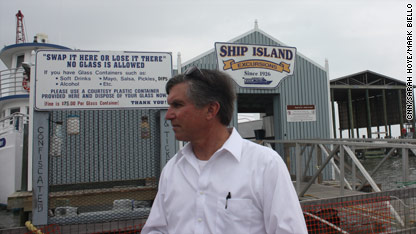 Louis Skrmetta, the operations manager of Ship Island Excursions in Gulfport, Mississippi, says the oil spill could lead to him filing for bankruptcy.

The Louisiana Department of Environmental Protection posted this notice:

"BP is looking to contract with vessels for hire (shrimp boats, oyster boats, etc.) to deploy boom in the Gulf of Mexico. The response contractors for this program are already collecting information on vessels. Specifically, they need the name, owner, dimensions, characteristics (including length, draft, horsepower, etc) and other pertinent information you can provide. Direction and training will be provided and determined by area response plans based on the highest priority areas on down.

"As soon as you have gathered the relevant information on your vessel, please email that information to the managing contractor Vince Mitchell at vince.mitchell@lamor.com or 425-745-8017. As well, please copy BP's coordinator Grant Johnson at grant.johnson@bp.com."

For many residents and businesses along Florida's Panhandle, the oil spill has been met with uncertainty, CNN affiliate WALA reports.

The question for many Floridians bracing for the oil spill to head their way isn't why, or how, but simply, what to do now?

"I guess one thing about hurricanes is you know what you can do," Santa Rosa County Chamber of Commerce President Meg Peltier told WALA. "You go to the store, you shop, you buy all your goodies and you get ready. People want to get ready for this, but they don't know what to do," Peltier said.

Buddy Rogers, who operates a beach business, told WALA that "The phones have just about stopped ringing, and those that are calling, they're cancelling charters." Rogers said, "I've offered the boat [to authorities] in any way I can, pull booms, whatever they think we can do to help. Right now, all I can do is cut all my spending, save what little bit I can."

Mississippi Gulf Coast residents see their way of life imperiled as the oil slick sloths toward the shoreline.

Fisherman Harold Strong told WLOX, "We'll be out of business, basically, pretty much devastated. I see no recovery. If you lose two to three years, I can see absolutely no way to come back from it."

Marc Douroux Jr., who fishes for a pasttime rather than livelihood, said the oil spill is sure to change marine life.

CNN All Platform Journalist Sarah Hoye and photojournalist Mark Biello are currently in Gulfport, Mississippi. They spent the morning with local tour boat captains, whose livelihoods ŌĆō ferrying tourists around the barrier islands ŌĆō are threatened by the approaching oil spill.┬Ā

Louis Skrmetta is the operations manager of Ship Island Excursions, a family-owned business since 1926. He told CNN that the oil coming to shore is worse than Hurricane Katrina.┬Ā

"At least with Katrina we had clean water and something to eat," he said. "I'd rather lose my house again than go through this."┬Ā┬Ā

With his three boats docked, Skrmetta says he is considering filing for bankruptcy if he cannot operate tours this summer, his busiest time of year.

An Indiana company that specializes in removing toxic waste may hold the holy grail of oil spill cleanups: A crude oil-eating microbe.┬Ā┬Ā

Steve Kennedy, president of Bioremediation Inc., told CNN affiliate WSBT his business partner in Florida is working to get the company a shot at the oil slick.┬Ā

ŌĆ£Ours would be a simple way," Kennedy told WSBT. "It would be spraying [the product] down and letting the microbes consume it off. That is how it works.ŌĆØ┬Ā

Kennedy told WSBT: ŌĆ£Us as humans, we consume steak and pizzas. Our microbes consume hydrocarbons, and crude oil is a hydrocarbon."┬Ā

While the oil spill Friday was more fright than bite for southwest Florida, that didn't stop tourism officials in the region from fretting.┬Ā

Tamara Pigott, director of the Lee Co. Visitor and Convention Bureau, told CNN affiliate WINK, "We don't need any bad publicity to scare off our European visitors, who come here in the summer typically."┬Ā┬Ā

Hotel manager Ken Carpenter told WINK, "Business is not good already, and to have this kind of mess would really hurt us, heading into the summer months. We are just holding steady with what we did last year, and we don't need bad publicity!"┬Ā┬Ā 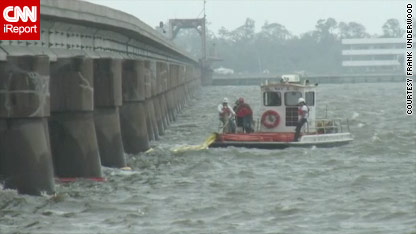 iReporter Frank Underwood, who lives in Waveland, Mississippi, spotted these crews in nearby Bay St. Louis on Friday setting out protective booms along a bridge.

A worried chef in Florida┬Ā┬Ā

As Florida's Gulf Coast restaurateurs anxiously watch developments related to the oil spill, one chef in Lantana, Florida, said the disaster will cause a spike in seafood prices in the area.┬Ā┬Ā

"Where's all the oil at? On top of the water," Lepre said. "And what are you gonna do when you scoop them up and they're full of oil?"┬Ā┬Ā

University of Alabama-Birmingham researchers have decided not to release a group of Alabama diamondback terrapins in the Gulf this weekend due to the oil spill, CNN affiliate WBMA reports.┬Ā┬Ā

"If you get an oil slick in there - [the terrapins] live in the salt marsh, that's going to coat the salt marshes," Dr. Thane Wibbels, a UAB biologist told WBMA. "And these things feed off crab and snails, and anything they eat is going to be covered in oil. The immediate impact is they are going to be eating oil laden food. It's going to be bad for their health and possibly result in mortality."┬Ā┬Ā

A team of researchers is heading to the Gulf, where the mature male terrapin population is "teetering," Webbels said.┬Ā┬Ā

More than 200 of the parishŌĆÖs 330 fishing operations have offered their boats, docks and other aid.┬Ā┬Ā

ŌĆ£People around here, they know the marsh. This is what they do here every day,ŌĆØ fisherman Kevin Heier told WWLT-TV. ŌĆ£They know how to get from one place to another using the safest route with the weather condition. Why waste your time with people who donŌĆÖt know the area trying to do the work, while we can get you there and back without a problem?┬Ā┬Ā

ŌĆ£We have all these boats available. People will be out of work. The fishing industry, IŌĆÖm sure, is going to go to hell. We just donŌĆÖt understand why theyŌĆÖre going to get outside contractors to do the work.ŌĆØ┬Ā┬Ā

His business has survived cataclysmic natural disasters, but commercial fisherman Rene Cross of Plaquemines Parish, Louisiana, says the impending man-made disaster would do him in.┬Ā┬Ā

ŌĆ£That would put us out of business,ŌĆØ Cross told CNN affiliate WDSU-TV. ŌĆ£And it's so hard to have come as far as we've come back, to get beat down again.ŌĆØ┬Ā┬Ā

Among the wildlife that could be affected by the oil spill is the tarpon fish, CNN affiliate WPLG-TV reports. The tarpon, the icon of Florida's $10 billion fishing industry, grows up to 10 feet long and can live for 80 years. Before it swims into Florida's waters, the tarpon grows up in the Gulf of Mexico.┬Ā┬Ā

"The entire path of which they are operating is under assault, if you will," said Gerald Ault, a marine biologist who studies tarpon migration at the University of Miami's Rosensteil School. "The timing, really, for that animal probably couldn't be any worse because this is right in the middle of peak spawning period."┬Ā┬Ā

Ault has detailed charts that map the location of the oil rig explosion off the coast of Louisiana and its slick growing larger than West Virginia. The projected path of the oil, if it is carried east around the Florida peninsula, mirrors the tarpons' migratory pattern, Ault said.┬Ā┬Ā

"It's going to seriously impact or have an impact on Florida fisheries both in the Gulf and the southeastern U.S.," Ault said.┬Ā┬Ā

ŌĆ£BP purchased millions of feetŌĆØ of boom, he said. ŌĆ£ItŌĆÖs $30 a foot and itŌĆÖs 20 inches deep. The maker of the boom actually says this will not be effective in high seas. The weather report this morning was weŌĆÖre having our first coastal flood warning of the season.┬Ā┬Ā

ŌĆ£All the effort of the boom being put in place ŌĆō I know they have to do something ŌĆō is going to be useless,ŌĆØ he said.┬Ā┬Ā

Amerson said he is not taking any measures to protect his waterfront home, but has volunteered to help clean wildlife with Emeral Coast Keepers.┬Ā┬Ā