END_OF_DOCUMENT_TOKEN_TO_BE_REPLACED

8:10 p.m. - Four gunmen opened fire in a hospital in the Pakistani city of
Lahore on Monday, killing five people in an attempt to get to a suspect in last
week's attacks on a religious minority, authorities said.

More on the shooting

President Barack Obama cut short his Memorial Day remarks Monday in Elwood, Illinois, telling people to take shelter in their cars due to a heavy storm.

[Updated at 10:57 p.m.] Here are the latest developments involving the pre-dawn raid by Israeli military on a flotilla of six ships carrying aid for the Palestinian territory of Gaza:

- As many as nine Americans may have been aboard the Gaza relief flotilla and were being held by Israeli authorities, a State Department
official said.

- The U.N. Security Council held an emergency meeting Monday called by Turkey in response to the incident.

- On Monday, Israel insisted its soldiers were defending themselves when they opened fire. "They deliberately attacked soldiers," Israeli Prime Minister Benjamin Netanyahu said of the activists.

- In Iraq, hundreds of supporters of radical Shiite cleric Muqtada al-Sadr took to the streets of Baghdad in protest of the Israeli action.

- Israeli Prime Minister Benjamin Netanyahu has cut short his visit to Canada, and will return to Israel after holding a working meeting with Canadian Prime Minister Stephen Harper to "update him on the recent events," said an e-mailed statement from a spokesman. Netanyahu spoke with German Chancellor Angela Merkel earlier Monday, the statement said.

- The Israeli troops "were not expecting to be attacked," said Jonathan Peled, minister-counselor at the Israeli embassy in Washington. He said the soldiers came aboard carrying paintball pistols, but were attacked with knives and metal bars. One naval commando was stabbed, prompting the soldiers to open up with live fire, killing the nine, he said.

- The Palestinian Cabinet, in its weekly meeting, "strongly condemned the Israeli crime against international supporters on board of the Freedom Flotilla, which reveals, once again, Israeli disregard to the lives of innocent civilians and its disrespect to international law, norms and resolutions," the Palestinian Authority said in a statement.

END_OF_DOCUMENT_TOKEN_TO_BE_REPLACED

According to Lauren Schulz of the United States Marines, the incident, which occurred shortly after 9 a.m. ET at Clove Lakes Park on New York's borough of Staten Island, was part of New York City's annual Fleet Week Exhibition, which includes military displays from the Navy, Coast Guard, and Marines.

END_OF_DOCUMENT_TOKEN_TO_BE_REPLACED

The death toll from Tropical Storm Agatha is growing, with 123 reported killed in Guatemala, 14 in Honduras and nine in El Salvador.

At least 90 people are missing in Guatemala and another 69 are injured, the nation's emergency agency reported late Monday.

The previously reported toll for Guatemala was 92 deaths, 54 people missing and 59 injured.

German President Horst Koehler resigned suddenly Monday over what he said was heavy criticism about comments he made on Germany's military involvement in Afghanistan, which he said had been misinterpreted.

END_OF_DOCUMENT_TOKEN_TO_BE_REPLACED

Home and Away: Remember our soldiers who died

CNN has tracked the casualties since the wars began in Afghanistan and Iraq; a new featureÂ to the site tracks service members' hometowns against a map of where they died in Afghanistan. The feature also highlights memories of the fallen by friends and families.

Today, on Memorial Day, we remember the soldiers from all parts of the world and from every U.S. state who have given their lives fighting for their country, More than 1,700 U.S. and coalition troops have died in Afghanistan, according to a CNN count.

Take a look at our new special Home and Away to view, remember and post tributes to all of the soldiers, like Pfc. David John Bentz III, whose mother Kimberly Geonnotti is remember him on this Memorial Day.

[Updated at 1:02 p.m.] Editor's note: On Memorial Day, this column honors military personnel, some of whom have given their lives during service, as well as those who support them. This weekday feature presents profiles of people whose actions, ideas or beliefs are newsworthy. 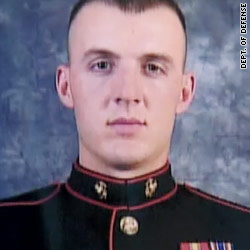 The U.S. military, family and friends are mourning the loss of Leicht, a U.S. Marine Corps corporal.Â Â CNN affiliate KABB-TV in San Antonio, Texas, is reporting that Leicht was the 1,000th American GI killed in the Afghan war.

The 24-year-old from Kerrville, Texas, was killed Thursday in an explosion while on foot patrol in Afghanistan, according to the station. Jonathan Leicht, the Marine's brother, told the TV station that he had only been there for two weeks.

Before Afghanistan, Leicht underwent two years of physical therapy after injuries he suffered while fighting in Iraq in 2007.

Because CNN only counts U.S. troop deaths inside Afghanistan, the CNN tally of U.S. deaths has not reached 1,000.Â  Other media organizations count war-related deaths in other countries, such as in Pakistan.

END_OF_DOCUMENT_TOKEN_TO_BE_REPLACED

Gulf oil spill - BP could try to cap a massive oil gusher again early this week in an attempt to solve what the Obama administration has called "probably the biggest environmental disaster we've ever faced in this country." As theÂ  spill entered its 42nd day Monday, efforts to clean up coastal areas and develop a new plan of attack continued. All previous attempts to contain the crude gushing from BP's undersea well have failed, including a "top kill" approach that many had pinned their hopes on.

END_OF_DOCUMENT_TOKEN_TO_BE_REPLACED

Turkey has recalled its Israeli ambassador after 10 people were killed in a skirmish with the Israeli military while attempting to defy an Israeli blockade and deliver aid to Gaza, Deputy Prime Minister Bulent Arinc said.

END_OF_DOCUMENT_TOKEN_TO_BE_REPLACED

The North American Air Defense Command scrambled a pair of F-16 fighter jets Sunday afternoon over Chicago when a Cessna 150 aircraft violated a temporary restricted flight zone near the residence of President Obama.

END_OF_DOCUMENT_TOKEN_TO_BE_REPLACED

An Aeromexico flight from France to Mexico was diverted to Montreal, Canada, Sunday because a "person of interest" was on board, a Transportation Security Administration spokesman said.

END_OF_DOCUMENT_TOKEN_TO_BE_REPLACED

Authorities evacuated Union Station, the main train terminal in Washington, D.C., on Sunday afternoon due to a chemical odor from an equipment closet, according to a spokesman for the D.C. Fire and Emergency Medical Services Department. END_OF_DOCUMENT_TOKEN_TO_BE_REPLACED

[Updated at 12:22 p.m. ET] Six people have died in El Salvador as a result of rains associated with Tropical Storm Agatha, which killed at least 12 people and left 22 missing in neighboring Guatemala, the Salvadoran government said Sunday.

END_OF_DOCUMENT_TOKEN_TO_BE_REPLACED

[Updated at 12:12 p.m. ET] Here are the latest developments involving the BP oil spill in the Gulf of Mexico:

-Â Obama administration questions BP's estimate of oil spill rate: "BP has a financial interest in these numbers. They will pay a penalty based on the number of barrels per day," Carol Browner, Obama assistant on energy and climate change, said.

- BP Managing Director Robert Dudley said Sunday that after failing to plug the Gulf of Mexico oil leak, the next step is try to reduce the amount of oil spilling into the ocean while drilling a relief well intended to halt the leak by August.

- Dudley said that oil would continue to flow "for a while" from the leaking well, and the company would strengthen efforts toÂ  keep it from reaching Gulf beaches.

The right-hander retired all 27 Florida Marlins batters he faced in a 1-0 victory in Miami. He struck out 11. See the boxscore at SI.com

Although the feat is among the rarest in baseball, 2010 will go down as the first year in the modern era in which a perfect game has been thrown twice in the same season. The Oakland Athletics' Dallas Braden was perfect against the Tampa Bay Rays on May 9.

President Obama issued this statement Saturday after BP announced its efforts to stem the flow of oil from a well in the Gulf of Mexico using the "top kill" method had failed:

Today, Iâ€™ve spoken with National Incident Commander Admiral Thad Allen, as well as Energy Secretary Steven Chu, Interior Secretary Ken Salazar, EPA Administrator Lisa Jackson, and senior White House advisors John Brennan and Carol Browner regarding the ongoing efforts to stop the BP oil spill.Â  From the beginning, our concern has been that the surest way to stop the flow of oil â€“ the drilling of relief wells â€“ would take several months to complete.Â  So engineers and experts have explored a variety of alternatives to stop the leak now.Â  They had hoped that the top kill approach attempted this week would halt the flow of oil and gas currently escaping from the seafloor.Â  But while we initially received optimistic reports about the procedure, it is now clear that it has not worked.Â  Rear Admiral Mary Landry today directed BP to launch a new procedure whereby the riser pipe will be cut and a containment structure fitted over the leak.

This approach is not without risk and has never been attempted before at this depth. That is why it was not activated until other methods had been exhausted.Â  It will be difficult and will take several days.Â  It is also important to note that while we were hopeful that the top kill would succeed, we were also mindful that there was a significant chance it would not.Â  And we will continue to pursue any and all responsible means of stopping this leak until the completion of the two relief wells currently being drilled.

As I said yesterday, every day that this leak continues is an assault on the people of the Gulf Coast region, their livelihoods, and the natural bounty that belongs to all of us.Â  It is as enraging as it is heartbreaking, and we will not relent until this leak is contained, until the waters and shores are cleaned up, and until the people unjustly victimized by this manmade disaster are made whole.

Britain's Treasury Chief Secretary David Laws, a member of the Liberal Democratic Party, has resigned over allegations he funneled public funds to a male lover, a party spokeswoman confirmed Saturday.

11:46 pm ET May 10, 2021 RETWEET
Fewer than 40 years after humans discovered Tiehm's buckwheat, a Nevada plant with yellow flowers, they may drive iâ€twitter.com/i/web/status/1â€¦rs
cnni