Even as officials try to combat and clean up the oil spill in the water and prepare for when it hits land, experts are still trying to fix the problem that started it all. Since the oil rig explosion a week ago, BP says it has been working every possible angle to stop the flow of oil. Bill Salvin, a BP spokesman, tells CNN affiliate WWL that every time they’ve tried to approach the broken valve, they haven’t been able fix the problem. “We know how frustrating that is for people. It’s frustrating for our team, and we’re going to keep on working on this to stop the flow.”

“It’s just an amazing effort, truly an Apollo 13 effort 5,000 feet below the surface of the ocean trying to stop this spill.” 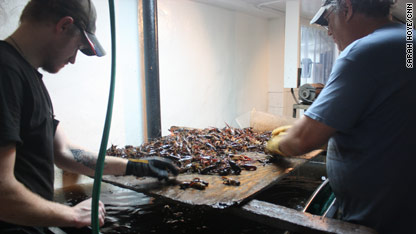 Stocking up and taking stock

PASCAGOULA, MISSISSIPPI – There was a steady stream of customers wading in and out of Bozo's Seafood Market & Deli. The family-owned business is a popular hang out and eatery in Pascagoula. Folks lined up with bags of freshly boiled crawfish and stocked up on oysters and shrimp.

Business may be good, but owner Keith Delcambre is worried about the future if the oil slick hits the coast.

"All I know is seafood," he said while sorting crawfish in small workroom behind the kitchen. "I don't know what we'll do if this hits. It feels like a hurricane is coming, but what can you do to stop oil?"

Down the road, instead of trolling for live bait and dealing with a steady stream of customers, CC's Bait Shop owner Charles Williamson watched as trailer after trailer backed up to the public boat slip to unload booms.

Married with four children, Williamson says he worked in the shipyards for 21 years to save up money to see his dream of owning a live bait shop come true. In 2006, he opened CC's Bait Shop, and by the beginning of the year he had restored his great-uncle's shrimp boat.

"This (oil) would put a stake in my heart, it would finish me off," said Williamson, who grew up working on his uncle's shrimp boat during the summers. "This was my dream; I'll probably have to shut this down."

- CNN's All Platform Journalist Sarah Hoye and Photojournalist Mark Biello are reporting along the Gulf Coast, taking a look at how the locals in Mississippi are preparing for oil to come ashore.

Louisiana shrimpers said that the oil spill in the Gulf of Mexico could not have come at a worse time - this weekend is the beginning of the shrimping season. One person sees an opportunity, though.

The Rev. Tyrone Edwards tells CNN affiliate WDSU he wants local fisherman involved in cleaning up BP's massive oil spill in the Gulf of Mexico that threatens their livelihood.  “We know that they'll be out of business from fishing. And this is a good way to employ them. So we see this as being a great employment for fisherman, because we see this thing lasting a long time,” Edwards said.

WDSU also reports that work has begun to guard Lake Pontchartrain from a possible threat from the oil spill.

“Let's mobilize. Let's be ready. I feel so bad for what's going on to our friends in South Louisiana, but I cannot let it get into this Lake Pontchartrain Basin,” said St. Tammany Parish President Kevin Davis.

"Now they're saying we are seeing sheens" hitting the coast, Louisiana Gov. Bobby Jindal said Saturday, citing the National Oceanic and Atmospheric Administration. "But they expect the heavier oil to be coming by tomorrow and Monday." 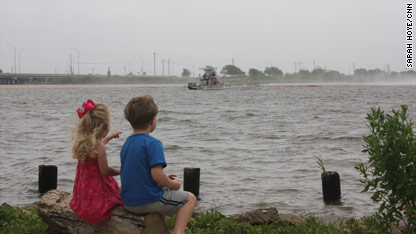 GAUTIER, MISSISSIPPI –  A number of boats and airboats peppered the waters of the Pascagoula River with bright orange booms to prevent the oil slick from reaching the estuaries.

Aimee Gautier Dugger, owner of  "The Old Place" historic family home, stood on the banks of the river to watch. She lives a short walk away.

"We never believed they'd protect this [river], Mississippi isn't thought of," she said, adding that the Gautier family, who settled in Mississippi in the 1600s and for whom the town is named after.  "Emotionally, economically, all of our beings are being affected. This is a big deal."

CNN's All Platform Journalist Sarah Hoye and Photojournalist Mark Biello are reporting along the Gulf Coast taking a look at how the locals in Mississippi are preparing for oil to come ashore.

Previous roundups:
– FRIDAY: 'People want to get ready for this, but they don't know what to do' and more stories
– SATURDAY: 'This will be catastrophic to the mom and pop businesses' and more stories