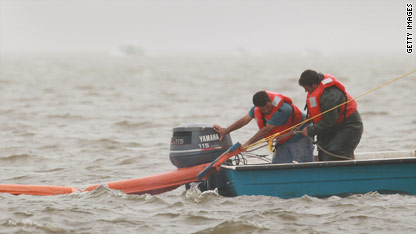 Workers in Louisiana place an oil boom into the water to try and protect the coast line from the massive oil spill.

[Updated at 10:01 p.m.]  BP chief executive Tony Hayward vowed that the oil giant would "absolutely be paying for the cleanup operation" of the oil leak in the Gulf of Mexico.

"Where legitimate claims are made, we will be good for them," he told NPR's "Morning Edition."

The U.S. government was leaving little to chance. Attorney General Eric Holder said Monday that Justice Department employees were in the Gulf region "to ensure that BP is held liable."

Allen said BP "is the responsible party" and "will bear all the costs" of the cleanup.

Still, the promises failed to quell the fears. "I hope we can weather the storm," said Keith Delcambre, owner of seafood market Bozo's in Pascagoula, Mississippi

See a timeline of the oil spill in the Gulf

[Updated at 9:56 p.m.] BP this week is going to attempt an unprecedented engineering feat to try and stop the oil spill, reports CNN's Brian Todd. It involves lowering a four-story metal container onto the leaking pipe to try to suck in the flowing oil.

[Updated at 9:31 p.m.] CNN.com's Steve Almasy reports that environmental scientists say the effects of the spill in the Gulf of Mexico could have ecological and biological consequences for years, if not decades.

[Updated at 1:56 p.m.] The Half Shell Oyster House in Gulfport, Mississippi is making plans to get their oysters, shrimp and fish from elsewhere in the Gulf of Mexico. Staffers tell CNN their local supplier has a plan to fish in areas closer to Texas, but they  still expect seafood prices to go up. However, the staffers say they don't expect much of a tourism decline unless the oil slick actually hits the local beaches. For now, the oil slick has remained offshore.

A portion of the northern Gulf of Mexico was closed to fishing on Sunday, curtailing the billion-dollar business.

[Updated at 1:47 p.m.] Florida Governor Charlie Crist told reporters in Tallahassee that he may extend the declaration on Tuesday to Collier and Monroe counties.

"In the event that the oil does come to our shores, I want us to be ahead of it as much as humanly possible," he said about the spill, which the oil giant BP is responsible for cleaning up.

Preparations are under way on strategies to stop the leak, though each has drawbacks.

The initial plan is to lower a dome over the wellhead next week to capture the spewing oil, said state Secretary of Environmental Protection Michael Sole.

"That would stop the flow, if successful," he said. "Unfortunately, it's never been tried at 5,000 feet below the surface of the water."

[Updated at 11:19 a.m.] The Justice Department, however, has sent a team to the Gulf Coast to meet with federal prosecutors and response teams, the department has said.

Attorney General Eric Holder said Monday that Justice employees are in the Gulf region "to ensure that BP is held liable."

[Update 10:32 a.m.] The oil disaster in the Gulf of Mexico comes a month after President Obama announced plans to expand offshore drilling. CNN's Kristi Keck takes a look at how the oil spill could sap appetite for Obama's offshore drilling plans. [Update: 9:19 a.m. ET] BP will "absolutely be paying for the cleanup operation" of the huge oil spill in the Gulf of Mexico, chief executive Tony Hayward said Monday.

"There's no doubt about that."

"It is indeed BP's responsibility to deal with this and we're dealing with it," Hayward told NPR's "Morning Edition."

And, he added, "where legitimate claims (of damages) are made, we will be good for them," according to NPR's website.

[Posted at 7:56 a.m ET] The battle against a huge oil spill in the Gulf of Mexico is being waged on three fronts, United States Homeland Security Secretary Janet Napolitano said Monday.

"One is to cap the well" that is leaking the oil, she said. "Efforts to do that have not succeeded to date."

Authorities are also trying to keep the slick from reaching land, and preparing to clean it up immediately if it does make landfall, she said on CNN's "American Morning."

Previous roundups:
– SUNDAY: An eerie stillness along Mississippi coast
– SATURDAY: 'This will be catastrophic to the mom and pop businesses' and more stories
– FRIDAY: 'People want to get ready for this, but they don't know what to do' and more stories