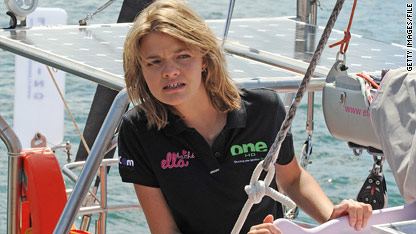 Jessica Watson is nearing the end of her 23,000-nautical mile voyage.

Australian teenager Jessica Watson is closing in on her goal of being the youngest person ever to sail solo around the world.

Watson, 16, wrote in her blog Monday that she had cleared the southeast cape of Australia’s southern island of Tasmania and was heading north to Sydney and the 1,000-mile conclusion of her 23,000-nautical mile voyage.

“We passed well clear of land, in the dark and with not the nicest conditions. But I still got a big kick out of it,” Watson wrote of her leg around Tasmania. On Saturday, she posted a picture on her blog of a 33-foot high wave near her yacht.

She wrote that she was happy to be heading to warmer waters.

“With a bit of water on your hands, this wind only takes a few minutes to make your hands go numb when working on deck,” she said in her blog.

The teen from Buderim, Australia, who began her trip on October 17, is expected to arrive in Sydney in mid-May.

The current record holder of the mark Watson seeks is Australian Jesse Martin, who did it in 1999 at age 19, according to CNN affiliate ABC news in Australia.

A reminder of the hell on earth that was Auschwitz. #NeverAgain twitter.com/AuschwitzMuseu…
sarasidnerCNN

2:34 pm ET January 24, 2021 RETWEET
This is BEAUTIFUL. The power of kindness is AWESOME. Get the tissues ready. twitter.com/Thund3rB0lt/st…
sarasidnerCNN