Clashes between protesters, riot police play out on Twitter 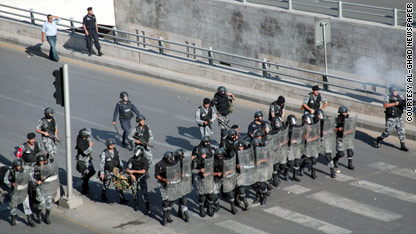 Riot police line up in downtown Amman after a protest got out of hand.

The Jordanian Twittersphere was abuzz Tuesday with news of a protest in downtown Amman - local citizen journalists reported street closures, crowds, and rumors of tear gas deployment and even death.

Amateur video posted on YouTube showed a police outpost in flames in the Jordanian capital Amman.

And the clashes between protesters and riot police resulted in the death of one protester and the injury of several others, according to Jordanian media reports.

Public Security Directorate Spokesperson Mohammed Al-Khatib told Ammon News that the flare-up began when security forces with a warrant went to search a man’s home for drugs. According to al-Khatib, when the police entered the home, they were attacked by the occupants and a fight broke out resulting in the death of one man - Abdul Salam Mthari.

Jordanian media, citing security forces, reported that a crowd believed to be made up of Mthari’s relatives then congregated in downtown Amman, attacking police vehicles and burning a police outpost.

CNN attempted to reach local authorities for further information, but the Public Security Directorate Spokesperson was unavailable for comment.

Jordanian authorities appear to be making a concerted attempt to crack down on the local drug trade in the Middle Eastern Kingdom. Ammon News reported on another search for drug trade suspects in rural Jordan today and said security forces there had been significantly increased. And just last month, authorities closed Amman’s famous al-Abdali market, citing concerns about its role in the local drug trade.