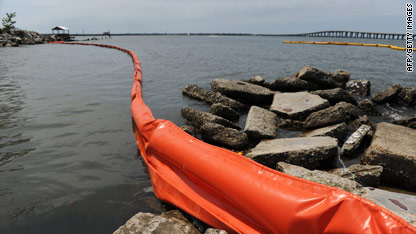 Oil booms were installed to help hold back the oil from reaching shore.

"One more time. Do we know who the 12 are? We do," Crowley said at his afternoon briefing. "Are we going to announce them publicly? We're not."

[Updated at 8:46 p.m.] A federal official in charge of monitoring the environmental impact of the massive oil spill in the Gulf of Mexico said Tuesday his agency is closely monitoring what he described as BP's "unique idea" to break up the spill with dispersant chemicals, deep underwater, reports CNN's Caleb Hellerman.

In addition to traditional methods of using dispersants on the surface, BP, has attempted to inject the chemicals near the source of the leak, where oil has been gushing out of the seabed and into the Gulf since at least April 22, when the Deepwater Horizon sank two days after an explosion and fire.

The barrier islands are home to a national wildlife refuge, and the state Department of Environmental Quality reported the thin, rainbow-colored sheen at the fringe of the 60-mile-wide spill could be seen lapping ashore Tuesday morning, Gov. Bobby Jindal told reporters. The Coast Guard and BP - which owns the exploded well responsible for the spill - have approved plans to protect waterways and marshlands in the parishes closest to the slick, but those parishes still need supplies like additional floating booms to carry them out, he said.

"Let's make no mistake about what's at stake here. This is our very way of life," Jindal told reporters. "This is our fishing communities, these are some of our coastal communities. We're talking about keeping this oil out of our fragile wetlands."

New Orleans Mayor Mitch Landrieu, who was the state's lieutenant governor until Monday, said the parishes have developed "excruciatingly detailed" plans that they are asking BP to approve. And Kevin Davis, the president of St. Tammany Parish's government, said local authorities have plans to use multiple lines of floating booms to keep the oil from moving into Lake Borgne and Lake Pontchartrain, which flank New Orleans to the east and north.

A plan is in place to protect Lake Pontchartrain, Davis said, but "That will certainly not be one we want to deploy. We're going to fight it on the outside." And the state is asking the Army Corps of Engineers to open spillways upstream in hopes of using fresh water "to help flush out the oil," Jindal said.

[Updated 1:26 p.m. ET] The Pentagon will pick up the tab for the mobilization of more than 17,000 National Guard troops called up by Gulf Coast states to battle the massive oil spill off Louisiana, a Defense Department spokesman said Tuesday.

[Updated at 1:08 p.m. ET] Democratic senators from two coastal states Tuesday called on President Obama to reverse his call for expanded offshore oil exploration after a massive spill from a damaged well in the Gulf of Mexico.

"I will make it short and to the point: The president's proposal for offshore drilling is dead on arrival," Florida Sen. Bill Nelson told reporters.

Nelson and New Jersey Democrats Robert Menendez and Frank Lautenberg are also backing legislation that would raise the legal cap on damages oil companies must pay for oil spills from $75 million to $10 billion.