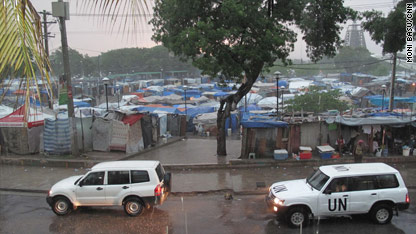 Rain pelts the tents in Port-au-Prince's Champ de Mars, which is now home to thousands of displaced Haitians.

At the central plaza in Port-au-Prince, now home to thousands of displaced Haitians, water pelted rows of tents, seeping inside from every direction Monday night. At the Champs de Mars people tried to close shut entrances, some with thin cotton sheets or blankets. Mothers rushed to move children sleeping on the ground.

Suddenly, the constant noise of the street came to a halt, replaced by the thud of monstrous drops falling hard from the sky. The only welcomed sight: gleeful children cooling off after another scorching day.

The water quickly started collecting along the roadside. Aid workers say they fear that constant rain will overflow garbage- and rubble-filled canals, flooding the encampments that have sprouted on their banks.

The situation in some camps could be life threatening.

In Haiti, everyone knows the rainy seasonŌĆÖs coming but there is little they can do to prepare. It comes every year in Haiti. The skies open up starting in May and the rains continue for several months. There is the added risk of hurricanes smacking into the nation that now lies devastated by the massive earthquake in January.

The International Organization for Migration estimates that about 2 million Haitians were displaced from their homes and are now living in more than 1,300 makeshift camps, some under bed sheets and flimsy tarps.

ŌĆ£A tent is a good place to be in another earthquake but not in a hurricane,ŌĆØ said Imogen Wall, spokeswoman for the United Nations Office for the Coordination of Humanitarian Affairs in Haiti.

Or in heavy rain, like the downpour Monday night in Port-au-Prince.

Almost 50,000 people are camped on the undulating nine-hole Petionville Golf Club. Vital Junior pointed to the dirt under his feet. When it rains, the place turns into a mud bath, slick and treacherous on the slopes.

At another much smaller camp in seaside Carrefour, water gushed down the hill and through the tents.

The fear is compounded by memories of Hurricane Jeanne in 2004 that weaved a path of destruction in the Gonaives area. Nearly 300,000 Haitians were affected ŌĆō more than 3,000 died.

With painful images lingering in their minds, 2 million people are sleeping in tents in this yearŌĆÖs rainy season.

They are homeless in the poorest nation in the Americas. Homeless in a nation thatŌĆÖs highly disaster prone and vulnerable to flash floods because of environmental degradation.

Haitians know what to expect of the rainy season, unlike the earthquake. Except this year, many have no roofs over their heads.

An Australian rugby league player has been given an eight-game suspension and fined ┬Ż500 (about $605) for "placingŌtwitter.com/i/web/status/1ŌĆ”AJF
cnni

6:45 am ET August 17, 2022 RETWEET
He was abducted and tortured by Russian soldiers. Then they started using his social media to push pro-Kremlin propŌĆtwitter.com/i/web/status/1ŌĆ”nK
cnni

6:30 am ET August 17, 2022 RETWEET
When cars brake or accelerate, they emit 'tire dust' -- it's the second-largest source of microplastics in the oceaŌĆtwitter.com/i/web/status/1ŌĆ”fQ
cnni