Trump's last-minute pardons officially include ex-strategist Steve Bannon and rapper Lil Wayne, but not himself orâ€twitter.com/i/web/status/1â€¦1Q

President Trump tells people he has decided to pardon his former chief strategist Steve Bannon as one of his finalâ€twitter.com/i/web/status/1â€¦oh

The Justice Department closes its investigation into stock trades Republican Sen. Richard Burr made after coronavirâ€twitter.com/i/web/status/1â€¦Fp 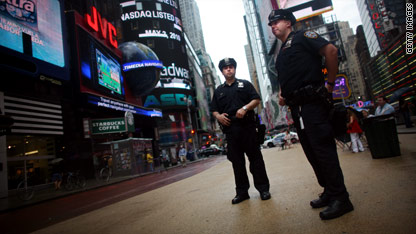 Times Square investigation - Questions remained in the days following the dramatic arrest of the Times Square bombing suspect, who was captured only minutes before his plane was scheduled to take off for Dubai in the United Arab Emirates. A court hearingÂ is possible Wednesday as investigators in the United States and Pakistan continue to chase leads.Â

We'll also take a look into what role the no-fly list played into capturing Faisal Shahzad, what it means to be on the no-fly list and how effective it may be in identifying suspicious individuals. Our reporters are also looking into Shahzad's history and what his family and life were like in the U.S. before the Times Square plot took shape. We'll also continue to provide constant updates on the blog to keep you up to date on any developments in the story.Â

Arizona immigration - The Tucson and Flagstaff city councils reportedly have voted to sue the state of Arizona over the state's new law targeting illegal immigrants. Members of the Phoenix Suns basketball team, meanwhile, plan to wear jerseys that say "Los Suns" in a playoff game Wednesday. The team's managing partner, in announcing the jerseys, said that "frustration with the federal government's failure to deal with the issue of illegal immigration resulted in passage of a flawed state law."Â

Gulf oil spill - - Crews working to stem the tide of oil in the Gulf of Mexico capped one of the three leaking points Wednesday, a BP executive said. John Curry, the director of external affairs for BP, said the leak that was capped was the smallest of the three.Â  Curry says the pipe was cut off and sealed with a slip valve.Â

As officials work to try to keep the oil from coming ashore, our reporters are also taking a look at what impact the spill may have on the tourism and seafood industries.Â

Dichotomy of Fred Phelps - Who is Fred Phelps? The easy answer: The Topeka, Kansas, pastor whose protests at the funerals of U.S. soldiers and antipathy toward homosexuals has gained him national recognition and resulted in a court battle that has landed on the steps of the U.S. Supreme Court. But as Phelps and his Westboro Baptist Church arrive in Atlanta to stage nine protests, we look at the Fred Phelps few know: The man, who in the 50s and early 60s, was one of the few lawyers in the country willing to take on civil rights cases.Â

Old-timers in the African-American community in Topeka knew that man and hardly recognize the one he has become. We talk to those civil rights activistsÂ  and two of Phelpsâ€™ 14 children, including one daughter who is part of his church and an estranged son who has become an atheist, in large part, he says, because of his father. CNN's John Blake reports.Â

China is rushing to build a massive quarantine camp that can house more than 4,000 people, after an outbreak of Covâ€twitter.com/i/web/status/1â€¦Nl
cnni

1:04 am ET January 20, 2021 RETWEET
RT @dougmillsnyt: Tears roll down @JoeBiden's face as he delivers remarks during a send-off event in his hometown of Wilmington, Delaware.â€¦
susancandiotti